On March 10, 2012, Porter married her husband Brian Autenrieth. The couple married at Diablo Dormido, a ranch in the Santa Monica mountains with about 100 guests. People reported that Porter wore a custom vintage-inspired R-Mine lace dress and the couple danced their first dance to Frank Sinatra’s “The Second Time Around.”

2. Autenrieth Was a Soap Star

Porter’s husband is actually a former Days of Our Lives actor and played the role of Zachary Parker. Today, Autenrieth works as a fruit exporter.

3. They Knew Each Other For Over a Decade Before Becoming a Couple

In an interview with People, Porter revealed that she and her man were longtime friends prior to getting into a romantic relationship. Porter gushed:

We’ve been friends for 13 years and it’s the most incredible feeling to know you’re marrying your best friend.

4. Porter and Her Husband Have Two Children

The couple currently resides in California and have two children together – son Mason Blaise and daughter Aria Sage. According to Daily Entertainment News, Autenrieth also has a child from a previous relationship, a daughter named Cassidy. 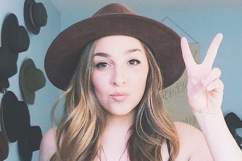 Alisan Porter, ‘The Voice’: 5 Fast Facts You Need to Know

5. During Her Blind Audition, a Flustered Porter Told Adam Levine that She’s Married

After Porter’s blind audition on The Voice, she awkwardly blurted out to Adam Levine, “I’m married,” when Levine came up and gave her a little kiss. He then replied that he’s married to as he was just in awe of her performance, trying to butter her up. Levine is currently expecting a baby with wife Behati Prinsloo.