Casey Dienel, an indie pop singer who performs under the name White Hinterland, filed a lawsuit against Justin Bieber and producer Skrillex for allegedly copying part of her song “Ring The Bell” in the monster hit “Sorry.”

According to TMZ, Dienel claims that “Sorry” features “unique characteristics of the female vocal riff” in her 2014 song. She also lists the other writers of “Sorry” – Julia Michaels, Justin Tranter and Michael Tucker – as defendants.

Here’s what you should know about Dienel and her song:

1. ‘Ring The Bell’ Is From Her Third Album

Dienel is signed to the record label Dead Oceans and has released three full albums so far under the White Hinterland name. Her third, titled Baby, includes the song at the center of the lawsuit. The video has earned over 46,000 views on YouTube. Baby even earned a review in Rolling Stone and received three-and-a-half stars.

Since the release of Baby, Dienel has released two EPs. She also released the single “Chill And Natural” last year. However, she is not currently on tour, according to her website.

Dienel and her fans think that Bieber has stolen from her before. In September 2015, she posted a picture of Bieber’s new hairdo on Facebook. “Bitch stole my look,” she wrote.

3. She Contacted Bieber When ‘Sorry’ Came Out

In a Facebook post, the Massachusetts-native wrote that she did contact Bieber’s team when she first heard “Sorry,” but was ignored. She wrote that Bieber never contacted her for permission. Dienel wrote:

Like most artists that sample music, Bieber could have licensed my song for use in “Sorry.” But he chose not to contact me. After the release of “Sorry,” my lawyers sent Bieber a letter regarding the infringement, but Bieber’s team again chose to ignore me. I offered Bieber’s team an opportunity to have a private dialogue about the infringement, but they refused to even acknowledge my claim, despite the obviousness of the sample. Justin Bieber is the world’s biggest artist, and I’m sure that he and his team will launch a full attack against me. But, in the end, I was left with no other option. I believe I have an obligation to stand up for my music and art.

A “private dialogue” might have been something similar to what Tom Petty and Sam Smith did after Petty learned that “Stay With Me” shared similarities to “Don’t Back Down.” The two artists were supposed to have had a “private” meeting, but word got out and Petty said there was no hard feelings between the two, notes Rolling Stone.

4. Revlon Used One of Her Songs

“Icarus,” from her first White Hinterland album Phylactery Factory (2008), was featured in a Revlon commercial that starred Jessica Biel. The same song was also used in an episode of Pretty Little Liars‘ first season.

Appearances like those have helped her build a following, albeit one much smaller than Bieber’s. She has over 11,000 likes on Facebook and the video for 2014’s “No Devotion” has over 63,000 views on YouTube.

Dienel is asking Bieber to stop playing “Sorry,” which appeared on his smash hit album Purpose from last year, and is seeking a portion of the profits. The song has over 1.4 billion views on YouTube and was performed at the Billboard Music Awards on Sunday.

“Sorry” also topped Billboard’s Hot 100 singles chart. Purpose was a No. 1 album for Bieber, topping the Billboard 200 in November. 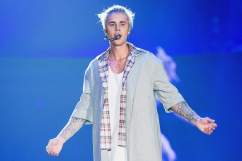