Tonight was the season 28 finale of The Amazing Race, with three teams left in the mix – Sheri LaBrant and Cole LaBrant; Tyler Oakley and Korey Kuhl; and Dana Alexa Borriello and Matt Steffanina. So, who does the million dollar prize go to … ? And the winners are … Dana and Matt.

For the first leg of the finale, the contestants head to Los Angeles, California. The teams’ first task is to leap off the top of a building at Angelus Plaza, which is a residential building for affordable living for seniors. In order to get their next clue, they had to jump off the building and grab a dangling card. If they missed the card, they would have to do it all over again. Of Matt and Dana, Matt performed the task and succeeded. Sheri offered to do the jump instead of her son but had a difficult time because she was so afraid. Because of her nervousness and crying, Sheri missed the card on her first try, but got it on the second. As for Tyler and Korey, Tyler went for the jump and also missed on his first jump … and his second … but he was able to get the card on his third attempt. Korey joked that Tyler kept messing up so that they could spend more time with a cute attendant named Brandon.

Next, the contestants traveled via helicopter to their designated motorboats at Sea Landing in Santa Barbara. In search of the Theresa Ann boat, Dana and Matt successfully picked up their next clue, which was taking them on a hike up Gibraltar Rock. Though in the lead, Dana and Matt had let their taxi driver leave and had to find a new one, which lost time for them. Sheri and Cole were in second and kept passing by the Theresa Ann, giving Tyler and Korey some time to catch up a bit. They even find the boat quickly and are on their way. When trying to get a taxi, Sheri and Cole have a bit of difficulty as the first taxi they found ended up being taken by Tyler and Korey. At Gibraltar Rock, the team members actually have to go rock climbing off a cliff. They each had to obtain half of a clue and put their two halves together to move on in the competition. Dana and Matt were still in the lead at this point. Dana and Matt remain in the lead as they complete the task and move on. Grassini Family Vineyards was the next stop.

Dana and Matt had to spell out different cities in the competition in order to keep going and they succeeded, receiving a clue to head to a lake. Sheri and Cole were still in second place with Tyler and Korey on their tails. Dana and Matt ended up making it to the finish line before the others. 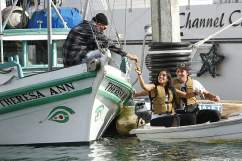 ‘The Amazing Race’ CBS Live Stream: How to Watch the Finale Online