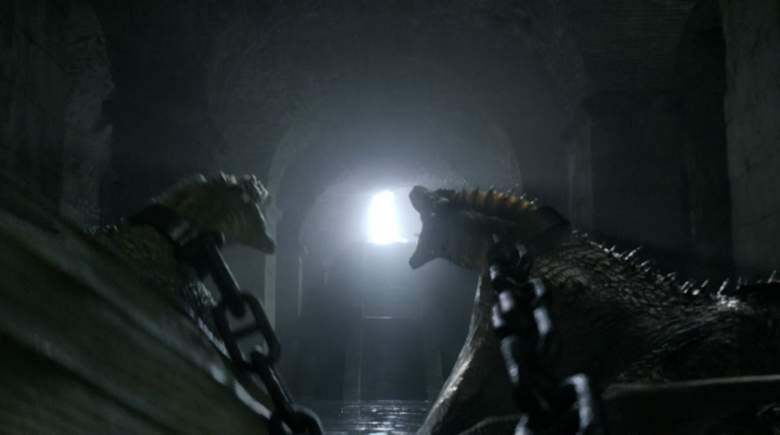 Is there a dragon in the crypts of Winterfell on Game of Thrones? (HBO)

Some fans of Game of Thrones believe that a literal dragon is living underneath the Stark castle of Winterfell, deep within the crypts. We already know the crypts of Winterfell are huge and full of mystery but, come on, a dragon!? It seems unbelievable. But once we started digging, it turns out that where there’s smoke, there’s fire. (Pun intended.)

So why do people think there might be a dragon at Winterfell? 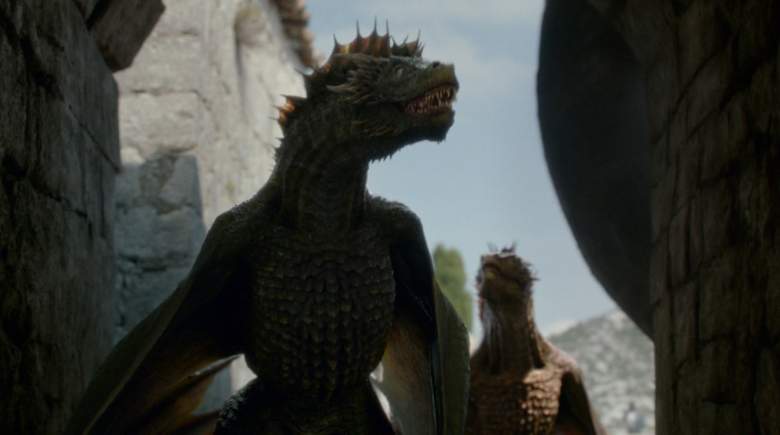 There are many rumors about dragons and Winterfell. (HBO)

Winterfell is built directly over a geological marvel:  hot springs. Here’s a quote about it from “A Game of Thrones,” the Catelyn II chapter:

The castle had been built over natural hot springs, and the scalding waters rushed through its walls and chambers like blood through a man’s body, driving the chill from the stone halls, filling the glass gardens with a moist warmth, keeping the earth from freezing. Open pools smoked day and night in a dozen small courtyards. That was a little thing, in summer; in winter, it was the difference between life and death.”

These hot springs are heated, the maesters say, by the “furnaces of the world” which appear only in two other places in the entire world. Both of those places are associated with, you guessed it, dragons.

Here’s a description from “The World of Ice and Fire,” the Winterfell chapter:

Hot springs such as the one beneath Winterfell have been shown to be heated by the furnaces of the world—the same fires that made the Fourteen Flames or the smoking mountain of Dragonstone.“

If you don’t know, the Fourteen Flames are located in Valyria where dragons were first discovered, and Dragonstone is where the Targaryens lived before invading Westeros. 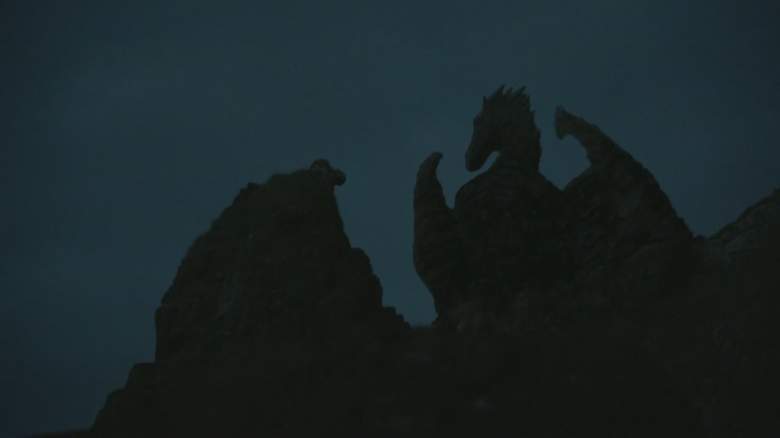 This is a dragon gargoyle from Dragonstone, seen in the Game of Thrones episode “The North Remembers.” (HBO)

The gargoyles of Dragonstone are described in “A Clash of Kings,” the prologue:

The comet’s tail spread across the dawn, a red slash that bled above the crags of Dragonstone like a wound in the pink and purple sky.

The maester stood on the windswept balcony outside his chambers. It was here the ravens came, after long flight. Their droppings speckled the gargoyles that rose twelve feet tall on either side of him, a hellhound and a wyvern, two of the thousand that brooded over the walls of the ancient fortress.” (emphasis mine)

Now here’s where things get weird.

Reddit contributor Pobeb theorizes about what it would mean if the gargoyles aren’t just for show. What if they had a practical purpose? Maybe, Pobeb suggests, gargoyles are used to bind dragons.

Sounds crazy right? And why the heck would there be a dragon at Winterfell!? As it turns out, it’s not unheard of, according to this quote from “The World of Ice and Fire,” in its Winterfell chapter:

Yet the smallfolk of Winterfell and the winter town have been known to claim that the springs are heated by the breath of a dragon that sleeps beneath the castle.” 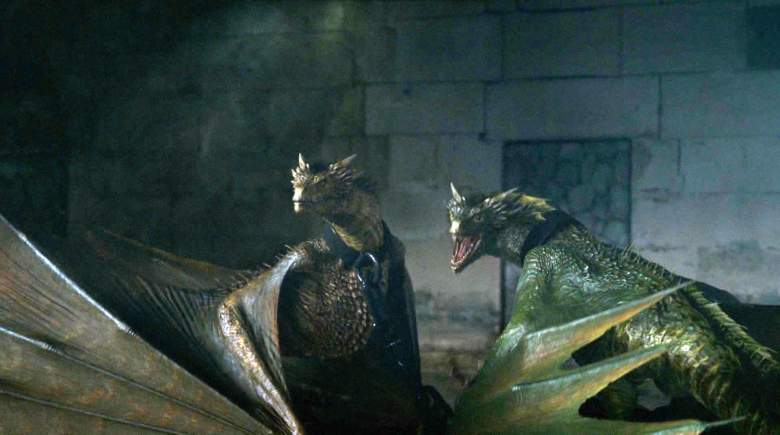 Do dragons live beneath Winterfell? (HBO)

Here’s one quote about his claim, from “The World of Ice and Fire” – Winterfell:

…We can dismiss Mushroom’s claim in his Testimony that the dragon Vermax left a clutch of eggs somewhere in the depths of Winterfell’s crypts, where the waters of the hot springs run close to the walls, while his rider treated with Cregan Stark at the start of the Dance of the Dragons…”

Remember that “The World of Ice and Fire” is written as history from a single maester’s perspective, so just because that particular maester dismisses Mushroom’s claim doesn’t mean that readers have to.

The Winterfell crypts, where Mushroom reports the dragon activity occurring, is located directly beneath the First Keep. And it’s this First Keep that has Winterfell’s gargoyles lining the top, according to “The World of Ice and Fire – Winterfell”:

Within its walls, the castle sprawls across several acres of land, encompassing many freestanding buildings. The oldest of these—a long-abandoned tower, round and squat and covered with gargoyles—has become known as the First Keep.” 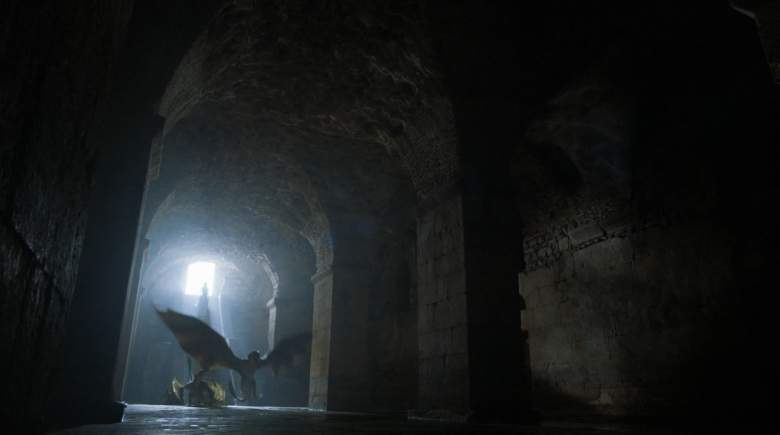 Are dragons in Winterfell? (HBO)

All of this brings us to something quite peculiar that happens when Winterfell is burned down by Ramsay Bolton. At the time of the fire, Bran is warged into his direwolf who is in the Godswood of Winterfell. Through his direwolf’s eyes, Bran sees what appears to be… a dragon. This is described in “A Clash of the Kings,” in the Bran VII chapter:

The smoke and ash clouded his eyes, and in the sky he saw a greatwinged snake whose roar was a river of flame. He bared his teeth, but then the snake was gone.”

And, what do you know, when Bran emerges from the crypts he find the gargoyles have been destroyed:

The sky was a pale grey, and smoke eddied all around them. They stood in the shadow of the First Keep, or what remained of it. One whole side of the building had torn loose and fallen away. Stone and shattered gargoyles lay strewn across the yard.”

If there was a dragon in the crypts of Winterfell, it probably isn’t there now. Instead, it probably escaped when Winterfell was burned by Ramsay Bolton and the gargoyles were destroyed. But why was it there in the first place? We will answer that question in an upcoming post about The Mysterious Crypts of Winterfell. We’ll add a link to that story right here once it’s available. 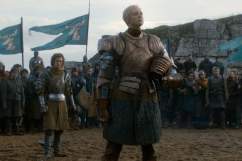 Is Brienne Related to Dunk (Sir Duncan the Tall) on ‘Game of Thrones’? 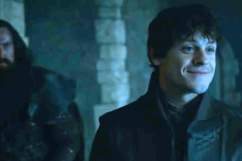 What’s the Gift for Ramsay Bolton? ‘Game of Thrones’ Episode 3