Walt Disney Studios has faced increased criticism about its lack of LGBT representation in its movies. The studio may take a small step forward in that department if speculation about the latest Finding Dory trailer turns out to be true.

A few eagle-eyed fans noticed two women in the trailer that appear to be a couple, although Disney-Pixar has not confirmed their relationship status. The Finding Nemo sequel stars Ellen DeGeneres, who famously came out in 1997, as the voice of Dory, the blue tang fish that suffers from short-term memory loss. 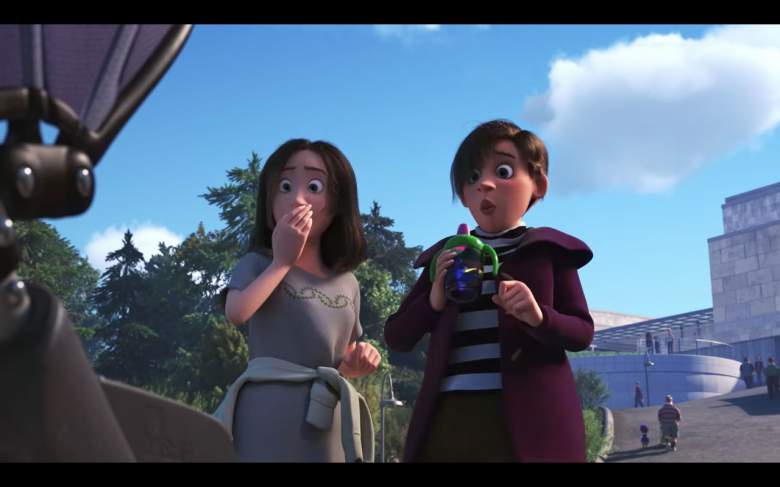 Some fans on Twitter believe these two women from the Finding Dory trailer represent the first lesbian couple in a Disney-Pixar movie. (screenshot/YouTube-Disney*Pixar)

The two women, who some fans believe to be a lesbian couple, appear at the 1:07 mark in the trailer and are only on screen for two seconds. Hank the Octopus (voiced by Ed O’Neill) is pushing a stroller and bumps into a small girl, which causes her to drop her sippy. One of the women goes to hand the cup back to her, but when she looks up, Hank is wrapped in the stroller and sucking on a pacifier.

“Poor baby, let me get that for you,” the woman says before her eyes go wide in shock at the awkward looking “baby.”

Disney fan Matthew Gottula spotted the potential couple soon after the trailer premiered on May 24. He and many other fans are excited to see what would be the first lesbian couple in a Disney-Pixar movie.

That new #FindingDory trailer released this morning? I think that's the first lesbian couple in a @DisneyPixar film. pic.twitter.com/S1wwJEOeWT

There's a lesbian couple in Finding dory how cute ??

ppl are freaking out bc a lesbian couple is in Finding Dory but no one cared when a girl fell in love with a bee smh pic.twitter.com/DBcBYI1TNj

The possibility of a lesbian couple in Finding Dory has also caused some backlash on Twitter, but fans have countered their concern with this fact about the movie — the lead character is voiced by lesbian comedian, Ellen DeGeneres. The talk show host reprises her voice role as Dory, the blue tang fish who suffers from short term memory loss.

DeGeneres famously came out about the same time as her character on the ABC sitcom Ellen in 1997. During “The Puppy Episode Part 1,” Ellen announced over an airport loudspeaker that she was gay. She has since become a leader in the LGBT movement.

Ppl r upset that a lesbian couple is in Finding Dory are also apparently unaware the star of the movie is a lesbian pic.twitter.com/xpDK5Eynk5

Some Frozen fans have campaigned for Disney to give Queen Elsa a girlfriend in the upcoming sequel while other Marvel fans want Captain America to have a boyfriend in his next movie. (Facebook/Frozen & Captain America)

The speculation about a lesbian couple in Finding Dory comes on the heels of recent social media campaigns asking Walt Disney Studios to add more LGBT characters to their movies. In early May, Frozen fans got the hashtag #GiveElsaAGirlfriend trending and a few weeks later the hashtag #GiveCaptainAmericaABoyfriend was a top 10 trend on Twitter.

Frozen comes from Walt Disney Animation Studios and Captain America is property of Marvel Studios, which is a subsidiary of Disney. The studios have not responded publicly to the campaigns.

Did ‘Frozen’ Already Feature the First Gay Couple in a Disney Movie?

Some Frozen fans believe the 2013 movie already introduced the first gay couple in a Disney feature film. In a quick scene, Oaken, the owner of Wandering Oaken’s Trading Post and Sauna, is seen waving to his family in the sauna where another man and four children are sitting.

Jennifer Lee, the co-director and screenwriter of Frozen, commented on the Oaken’s rumored sexuality in an interview with The Big Issue in March 2014.

We know what we made, but at the same time I feel like once we hand the film over it belongs to the world so I don’t like to say anything, and let the fans talk. I think it’s up to them.