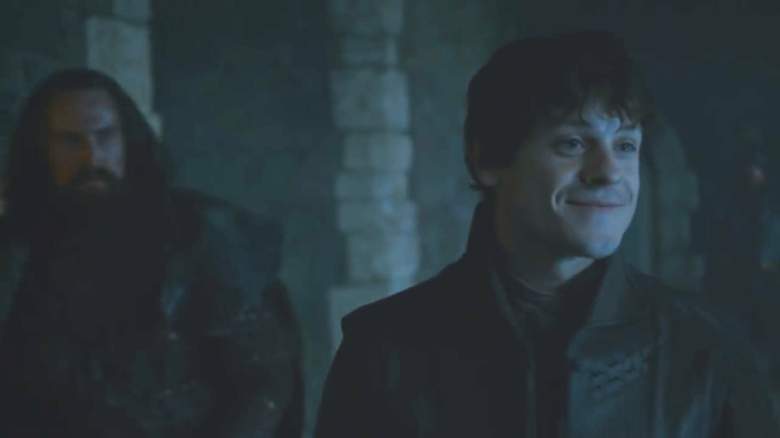 Ramsay Bolton is really happy about something. (HBO/Game of Thrones)

You may recall a small scene from the preview for this week’s Game of Thrones episode, “Oathbreaker.” It talks about a gift for Ramsay Bolton, and the theory behind exactly what that gift means is going to leave you very, very disturbed. Now that we know what the gift is, we can talk more about it and exactly how it came to pass. This post has spoilers through “Oathbreaker.”

House Umbers Has a Gift for Ramsay Bolton

In the preview for Season 6 Episode 3, we’re shown some House Umber banners. 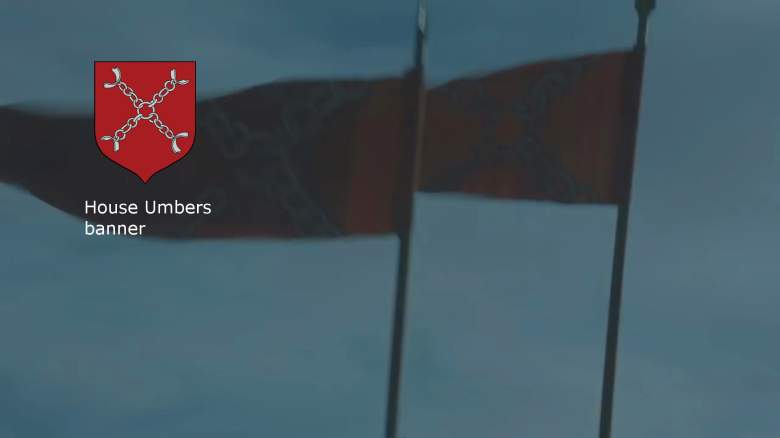 In the next scene, Ramsay Bolton asks “Why have you come to Winterfell?” 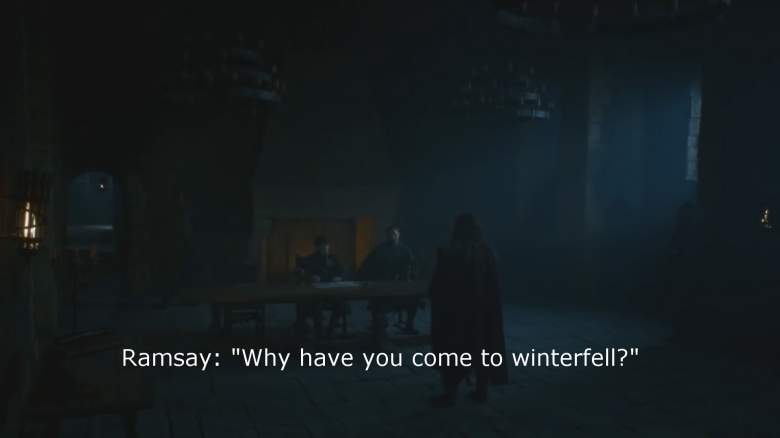 And a hairy man responds “I’ve got a gift for you.” 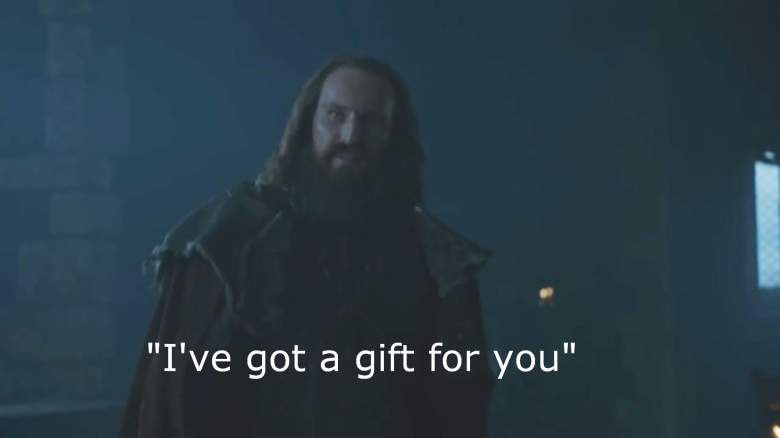 In the next shot, we’re shown the same two men, and Ramsay looking very pleased – which is never a good sign. 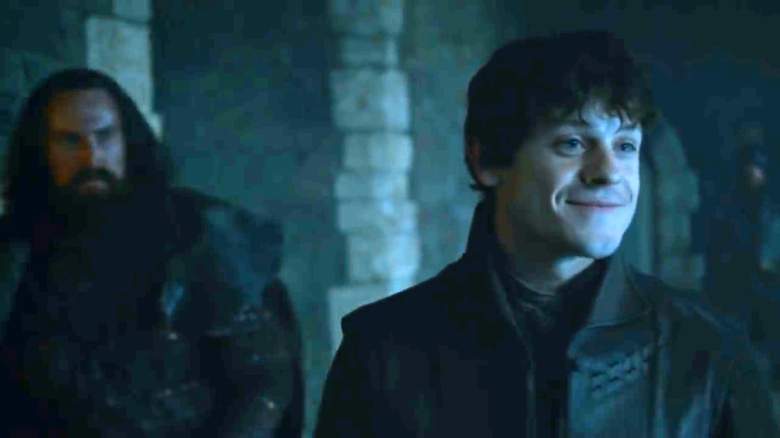 If you want to watch the exchange exactly as it appears in the preview, here’s the clip. The part we’re talking about starts at the :11 mark:

Some clever fans figured out what this “gift” for Ramsay is, and it’s not going to make you happy. Now that “Oathbreaker” has aired, we know that their predictions were right. But how did they get their little gift? This section is dark and full of SPOILERS through episode three of season six.

Reddit poster Backpacks_Got_Jets and Imgur contributor ollervo pointed out that the Umbers received a little visitor a few seasons back.

You may remember that in Season 3 Episode 9 of Game of Thrones, Bran and Rickon split up. In that exchange, Bran sends Osha and Rickon to the seat of House Umber – a place called Lasthearth. 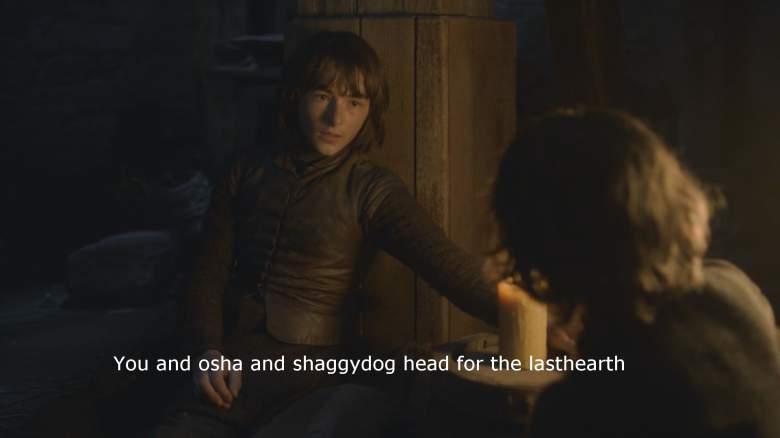 The Umbers’ visitor. (HBO/Game of Thrones) 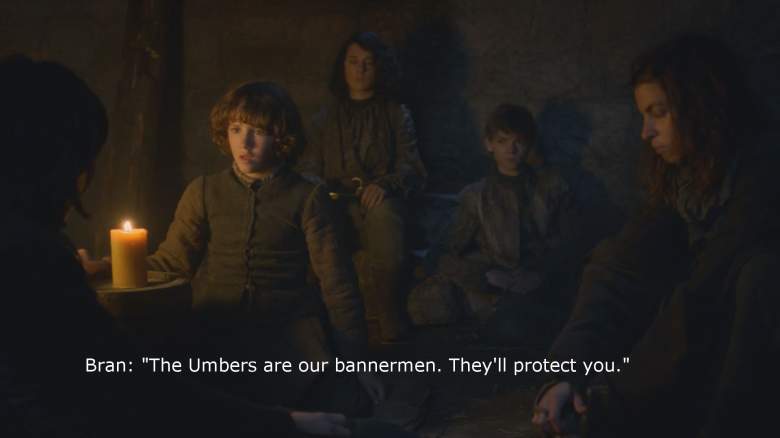 This is how the Umbers got hold of their gift for Ramsay. Ramsay received the presumed heir to Winterfell – Rickon Stark.

You see? We told you this would be dark.

Now we might be inclined to believe that the Umbers are staging a coup. Something like “Here’s your gift, Ramsay, I present the TRUE Lord of Winterfell. Now taste my steel!”

But Reddit commenter Pickle_Juice_Slurper dashed that dream with a keen observation about the second Season Six trailer. At ten seconds in, we watch Tyrion descend some steps and hear a voice saying “Do you like games, little man?”

What’s odd is that the voice sounds a lot like Ramsay’s. Check it out in the clip below, starting at the :10 mark:

It’s possible that HBO is using a little misdirection here by playing that line over Tyrion’s footage. If so, that’s got to be Ramsay toying with little Rickon Stark.

Whatever the case, we still hope the Umbers are planning to install Rickon as Lord of Winterfell. Maybe they’re playing a long con?

But this is Game of Thrones, not Lord of the Rings, so the safe bet is that Ramsay’s gift from House Umber is a big ol’ bag of Rickon brand puppy chow.

Read More
Game Of Thrones, HBO, TV
We've figured out the 'gift' for Ramsay Bolton on 'Game of Thrones,' and it's sick. But how did the Umbers get this gift and what's going to happen next?