The hit HGTV series is currently in its 18th season. (Screenshot/HGTV)

If your guilty pleasure is watching couples stroll through beautiful homes in the hopes of finding their dream house, then prepare to have your heart broken. Well, partially broken, at least. While some families who’ve been featured on HGTV’s House Hunters admit that the show isn’t as real as it appears, others have suggested that what you see actually is a pretty honest reflection of the truth. So, what’s the deal? Is the show real or fake? Read on to find out what we know.

1. The Houses Aren’t Always For Sale

Could you live in a tiny home? Check out some of our coolest tiny spaces tonight. Two NEW episodes of Tiny House, Big Living are coming up at 9|8c!

In 2012, potential home buyer Bobi Jensen spoke out about her experience being featured on an episode of House Hunters. She told Hooked on Houses, “The [houses] we looked at weren’t even for sale… they were just our two friends’ houses who were nice enough to madly clean for days in preparation for cameras!” This situation, however, seems to be an anomaly. The producers typically rely on buyers to set up house tours, but Jensen and her husband couldn’t find any realtors willing to be featured on the show. They therefore sought help from friends, who scrambled to make their houses presentable for the television crew.

Another homebuyer, Nathan Lambert, had his episode of House Hunters International air on New Year’s Day 2016. Lambert wrote an article for a blog called Medium, where he chronicled what his experience on the show was like. “Our story of how we decided to come to Fiji and what we were leaving was all real. They used all of our actual houses likes and dislikes, all of our actual concerns and the actual disagreements that we had were used in the show.” Lambert goes on to describe the experience as being an “honor” and “incredible.”

2. The House Search Is Scripted

Jensen wasn’t the first person to propose the idea of the show being staged. For years, allegations about the network choosing only young and attractive couples have circled. But when Jensen came forward saying that she’d already chosen a new home by the time filming began, other families stepped out of the woodwork. Jensen told Hooked on Houses, “They didn’t even ‘accept’ us being a subject for the show until we closed on the house we were buying.” She goes on to say that she and her husband had to pretend they were considering houses since they’d already closed on their home. Similarly, in 2014, a New York Radio Station interviewed realtor Tim Hurley, who was featured on the show with a New York City couple. Hurley told WPDH that the couple had purchased their new home before even applying to be on the show. He also claimed that due to scheduling conflicts, a stand-in replaced him for the episode.

3. The Families On The Show Are Real

@andymangold @mattmc My mother and I were on house hunters international if you have any questions. They hunt hard to find/make family drama

Despite the fact that some of the process seems be manipulated for the purposes of timing and production value, all the families on the show seem to be real people and not actors. Nathan Lambert writes, “I can say that this is totally legit, these families in the show are not actors, they are real. How do I know? Our Fiji episode just aired on New Year’s Day, 2016, and I know that my family and I are not actors.”

4. House Hunters Has Admitted that the Show Is Partially Staged

It's not easy being the #HouseHunters cameraman…https://t.co/1YCq4YqoP8

Jensen’s statement about the show being fake caused an uproar amongst House Hunters fans, and prompted a statement by the network. The publicist for House Hunters told EW, “Pursuit of a perfect home involves big decisions that usually take place over a prolonged period of time—more time than we can capture in 30 minutes of television.” The publicist went on to admit that the network often picks buyers who are far along in the process of buying a house, and because of how quickly the real estate market moves, they are often forced to “go back and revisit some of the homes that the family has already seen [to] capture their authentic reactions.”

5. Other HGTV Shows Are Being Sued For Being Fake

The idea of House Hunters being fake isn’t all that farfetched; after all, a North Carolina couple who were looking to renovate a rental property is currently suing the producers of “Love It Or List It” for irreparable home damage. The couple told the Miami Herald, “The show [was] scripted, with ‘roles’ and reactions assigned to the various performers and participants, including the homeowners.’ The suit also stated that the renovators did a poor paint job, and most of the couples’ deposit went to staging rather than home repairs. HGTV was not directly named in the suit, which is instead targeting the Canadian company that produces the show, Big Coat TV. The company’s CEO and executive producer Maria Armstrong refused to comment on the matter. 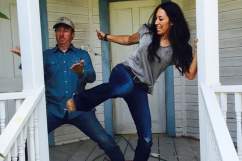 Chip and Joanna Gaines: 5 Fast Facts You Need to Know