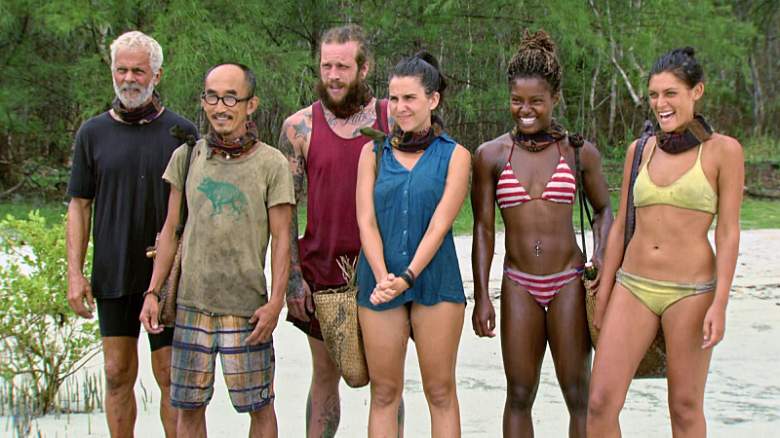 Last week on Survivor, Tai narrowly escaped elimination, but a plan to take out Julia won, leaving Jason alone in his alliance. And, on tonight’s episode, Jason reached the end of the line. Get the full recap of the episode by reading onbelow.

Tonight, almost immediately after tribal council, Jason tries to gather some allies while Tai talks to Aubry and Joe about having an extra vote as well as an immunity idol. With three against three and Tai’s extra vote, this could be an interesting episode.

Jason worries that people won’t strategize with him and Joe feels Jason has no respect.

For the reward challenge, the contestants were put into teams of three to go through a series of obstacles. The reward was with the Wildlife Alliance and an afternoon picnic. Aubry Bracco, Joseph Del Campo and Cydney Gillon were on one team, with Kyle “Jason”, Michele Fitzgerald and Tai Trang the other team. Tai’s team got the win, but he worried that while he was away enjoying his team’s reward, would his alliance with Joe and Aubry fall apart? He may have been onto something because Cydney and Aubry become a little frustrated with Joe, who they find to be a bit bossy.

While Tai and his team are hanging out with the Wildlife Alliance, he begins to think that Michele is the best person to vote out next. Meanwhile, Michele is thinking that she wants Jason to be kicked off.

When the Immunity Challenge goes down, the contestants must line up blocks that spell “immunity.” Joe takes the lead for most of the challenge until he drops all of his blocks. After others begin to drop, Jason takes first place until he messes up as well. Cydney takes the lead, but Jason gains momentum. At the last minute, Jason drops his full stack of blocks, which resulted in a win for Cydney.

Tai lets the others know that he wants Michele to be voted out. Cydney doesn’t like that Tai is dictating to the group and Aubry feels caught in the middle. At tribal council, several of the cast members were at odds, particularly Michele and Tai. Because of all the controversy, Tai decides to use his advantage of having an extra vote, voting for Michele to leave. When the votes came in, there were four votes for Jason, two for Michele and one for Joe. This meant that Tai basically wasted his extra vote.

Stream Survivor 2016 live via via CBS All Access, a service that streams live CBS shows in most U.S. markets.

Now check out the Top 5 contestants left in the competition below in our remaining cast gallery.

Tai started off being so peaceful and viewers wondered if he had it inside of him to be a true "Survivor." Tai has proven to be a strategist and has elevated himself in the game. Unfortunately, tonight he may have been taken down a notch. (©2016 CBS Broadcasting, Inc. All Rights. Reserved.)