Jimmy Kimmel has been hosting Jimmy Kimmel Live! on ABC as the network’s sole late night host since 2003.

Kimmel’s parents are Jim and Joan Kimmel. He has two younger siblings named Jonathan and Jill. Some of his family members, including his Aunt Chippy and his cousin, Sal, have been on Jimmy Kimmel Live.

The Brooklyn-born comedian has been married twice and has four children, two with his first wife, Gina Maddy, and two with his current wife, Molly McNearney.

1. His Dad Worked for IBM & His Mom Was a Homemaker

Although Kimmel, 48, was born in Brooklyn, his parents moved to Las Vegas when he was 9 years old. His father, Jim, used to work for IBM, and his mother, Joan, is a homemaker, according to People Magazine. Kimmel also has two younger siblings.

In 2012, Kimmel did a bit on Jimmy Kimmel Live about his family history with an expert from Ancestry.com. Kimmel learned that his father’s family emigrated to America from Germany, while his mother’s family came from Italy.

You can watch the video below.

2. He Has 2 Grown Children From His First Marriage

Why is my dog hotter than me?

Kimmel met his first wife, Gina Maddy, while attending Arizona State University, when he was 19. They married two years later in 1988. They divorced in 2002. They have two children together, Kevin, 23, and Katie, 25.

Gina runs Maddy James, a successful apparel site. Kevin works in television, while Katie earned a BFA from the School of Art Institute of Chicago.

According to his IMDb page, Kevin Kimmel most recently worked in the sound department for Tosh.O and was a production assistant on The Meltdown With Jonah and Kumail. He has also worked backstage on Survivor and Big Brother.

Katie works as a ceramics artist in Hermosa Beach, California. All of the pieces that she creates appear to have their own personalities, which is something that is intentional.

“I don’t name every piece, I leave that daunting task to their future owner, but I do have a sense of their personality while I am making them. Last year a family friend came to see some of my art and I realized that every single thing I had to show looked exactly like him. Don Barris has unknowingly been/continues to be my greatest muse,” she said in the “interview” section on her website.

You can see some of her work in the pictures below.

Chiclet x3 for Gary and @jeanniehaydenart ?

If you don’t have any romantic plans today may I suggest giving yourself a big pretzel hug? ? in bio

Because ILY a bunch of ceramics will be up on my website tomorrow 9am pst ??❤️

3. He Has 2 Children With His Wife Molly McNearney 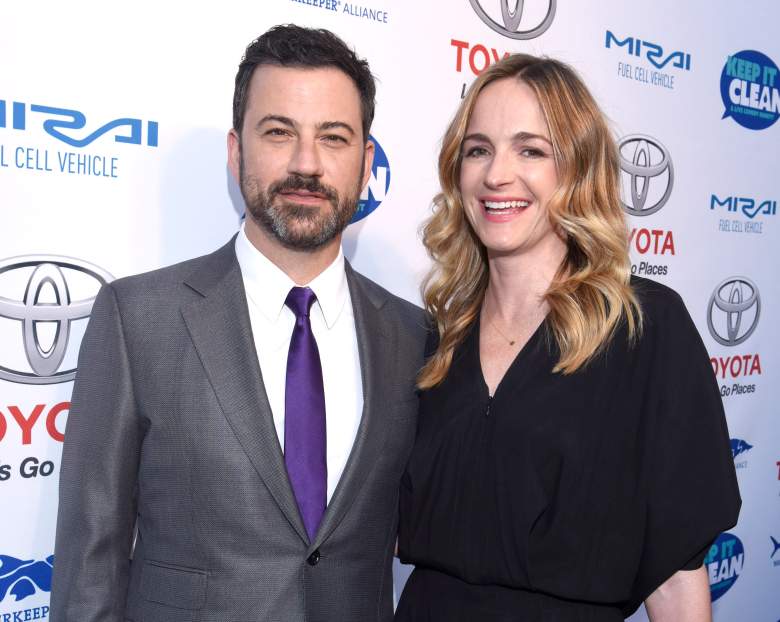 In July 2013, Kimmel married Molly McNearney, the co-head writer on Jimmy Kimmel Live. The soiree was packed with plenty of celebrity guests, including Ben Affleck, Matt Damon, Emily Blunt, and John Krasinski according to People Magazine.

Kimmel and McNearney are parents to Jane, 3. On December 5, 2016, the same day that Kimmel was hired to host the 2017 Oscars ceremony, Kimmel announced that Molly was pregnant with their second child. Their son, Billy, was born in April 2017.

You can watch that announcement in the video below.

When asked about the married life with Kimmel in Entertainment Weekly, McNearney said:

“Our Christmas cards and stationery are all handmade by him; our wedding invitation, he drew. He makes vinegar, he makes pasta from scratch. He really is Martha Stewart. I’ve never met a man that’s so feminine and so masculine at the same time.”

Kimmel’s son, Billy, was born with a congenital heart defect called tetralogy of Fallot with pulmonary atresia. The condition prevents the child from getting enough oxygen to his lungs.

“Basically, the pulmonary valve was completely blocked and he has a hole in the wall between the left and right sides of his heart,” Kimmel said in his monologue on Jimmy Kimmel Live in May 2017.

Billy underwent cardiac surgery when he was just a few days old. In late 2017, Billy underwent a second surgery. According to People Magazine, the surgery was a success.

“It makes me more thankful in general for sure. To be honest, it minimizes the importance of something like [the Oscars], which last year to me seemed to be the more important thing in the world. And then you just get the reminder that this isn’t even close to the most important thing in the world, and you’re reminded of that every day when you go home, so in a way, yes, it’s definitely made me appreciate my life but it also puts things in perspective,” Kimmel recently told Entertainment Tonight’s Kevin Frazier.

4. His Uncle, Frank Potenza, Was on ‘Jimmy Kimmel Live’ Before His Death in 2011 & His Aunt Chippy Is a Regular

For many years, Kimmel featured his uncle, Frank Potenza, on Jimmy Kimmel Live! Potenza was a retired New York City police officer and worked as a security guard in Las Vegas. He died in August 2011 after a battle with cancer.

Kimmel gave a tearful tribute to his uncle on Jimmy Kimmel Live! He joked that Potenza had hoped to live past 100 so he could keep collecting pension checks.

“Uncle Frank loved being a part of this show. And I wanna say thanks to my co-workers who talked to him and visited him and picked him up 12 hours early for work. He loved you. And thanks to all of you who came to the show and watched, for indulging me and letting me put my crazy uncle on television,” Kimmel said.

Potenza’s ex-wife, Kimmel’s Aunt Chippy, has also been a regular on the show. Concetta Potenza (her real name) lives and works in Las Vegas, but has often appeared in various skits on the show. You can see one of them in the video below.

Additionally, Kimmel’s cousin, Sal, often appeared on Jimmy Kimmel Live! He’s been on the show’s writing staff since 2003, but appears in various skits throughout the year.

Sal is also known for his role on The Man Show. He and his wife, Melissa, live in Los Angeles, California, with their three sons, Archie, Jack, and Harrison.

Jonathan Kimmel, Kimmel’s younger brother, is also active in Hollywood. According to his IMDb page, Jonathan was a writer on 57 episodes of South Park from 2004 to 2008. After that, he contributed to The Bonnie Hunt Show and his older bother’s show. As an actor, he appeared on the short-lived Trophy Wife in 2014 and voiced various characters on South Park.

Kimmel’s sister, Jill Bryan, lives in Arizona. She hosted a local television show there called Jill Bryan’s Scrumdillyumptious. In an interview with AZ Central, Bryan said that she has a cynical view of the media industry.

“I learned many years ago not to hope for anything in regards to this industry. It’s fun, and if it doesn’t (go far), at least it will be some fun film to have,” she told the outlet.