Jon Snow lives. In tonight’s episode 2 of season 6 of Game of Thrones the witch Melisandre casts a spell on Jon Snow’s corpse that apparently didn’t work… until the end.

Jon Snow was stabbed to death at the end of season 5. Viewers had a lot of theories about what was going to happen to this big fan favorite. (Read about those theories here.) Theories had ranged from Jon’s staying dead to his being resurrected in a completely spectacular and unexpected fashion.

After tonight’s episode, it is the latter. Watch it above or read a full analysis about it here. 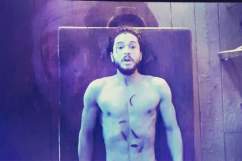 Read More
Game Of Thrones, Instagram, Youtube
Jon Snow lives. In tonight's episode 2 of season 6 of Game of Thrones the witch Melisandre casts a spell on Jon Snow's corpse that apparently didn't work... until the end.