Sherri Shepherd and Wanda Sykes are both in the running to become Kelly Ripa’s new co-host on Live. (Getty)

As Kelly Ripa continues her search for a new co-host on Live, executive for the show are expanding their search to include women. Possible candidates so far are Sherri Shepherd, a former co-host for The View, and Wanda Sykes, who hosted her own talk show in 2009, according to Us Weekly.

Ripa’s former co-host Michael Strahan exited Live on May 13, and a revolving door of male guest hosts have filled in over the last two weeks. Rob Lowe and Taye Diggs top the list as potential replacements for the former NFL player.

1. Shepherd Thinks People Are ‘Ready for a Woman with Kelly’

Sherri Shepherd threw her hat into the ring as a possible replacement for Strahan on May 18. She even suggested this catchy title to TMZ: “Kelly and the Black Girl.” But Shepherd insisted Kelly’s name always be kept first because she’s earned that right.

I think a woman would be great with Kelly… How ’bout a black woman? Ha! What! Would I do it? Yes! Kelly and Sherri. Kelly and the black girl, I don’t care. I would love to do it with Kelly. She’s like amazing. She’s fun.

Shepherd served as a co-host on The View for seven seasons between 2007 and 2014. “Seven in the Bible is the number of God’s completion and I’ve been here seven years and my time at The View is complete,” she said on the show in July 2014.

Sykes hosted The Wanda Sykes Show, a late-night talk show on Fox in 2009, but it was canceled after one season. It aired weekly on Saturday nights during the 2009-2010 season while its host was still starring on CBS’s The New Adventures of Old Christine.

The 52-year-old comedian told The Washington Post in 2015 that she would have done the show differently if she had another chance.

I had two full-time jobs. That was nuts. That was insane. I was surprised I didn’t lose my mind during that time. I did break my foot. But I was just trying to do too much. But in this business, you get an opportunity and you pounce on it… But I was proud of the show. I thought we did a good job. But if I ever did it again, that would not be the approach there. I’d probably have to put my kids for adoption. You can’t have any other responsibilities.

Sykes has appeared as a guest on Live in the past. She also co-starred alongside Ripa’s husband Mark Consuelos on the Amazon series, Alpha House.

3. ‘Live’ Has Always Featured a Male-Female Duo Behind the Desk

The syndicated talk show has always featured a male-female duo dating back to the show’s first incarnation as The Morning Show, which premiered locally in the New York area in 1983 with hosts Regis Philbin and Cyndy Garvey. Garvey was replaced in 1984 by Ann Abernathy, who was then replaced by Kathie Lee Johnson (later Gifford) the next year.

Live became nationally syndicated in 1988 as Live with Regis and Kathie Lee. Gifford left the show in 2000 and was replaced by All My Children soap star, Kelly Ripa. Philbin made his exit in 2011 after 23 years on the show. A 10-month search resulted in Michael Strahan joining Ripa as co-host on September 4, 2012.

ABC is in talks with Rob Lowe’s representatives for the 52-year-old actor to sign on as Ripa’s next permanent co-host, Entertainment Tonight reports. Lowe served as a guest co-host for two days in January 2012 during Ripa’s search for someone to replace Philbin.

Live has released its guest host scheduled through June 10 and Lowe is not scheduled to audition. He’s currently filming the movie How to Be a Latin Lover, but his schedule opened up after Fox canceled his comedy series, The Grinder. He told Entertainment Tonight that he would love the opportunity to co-host Live again.

I hosted it with Kelly [in 2012] and had the time of my life. I love her … I love being able to talk to an audience every morning like that and just being fun, counter-punching, being silly, and talking about cool stuff.

Taye Diggs is another front-runner to join Ripa behind the desk full-time, according to Us Weekly. Other names reported as possible replacements include Anderson Cooper, Mario Lopez, Jerry O’Connell and Alec Baldwin, who is scheduled to co-host on June 10. 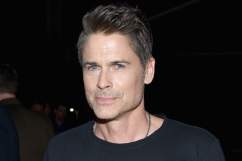 Will Rob Lowe Co-Host ‘Live With Kelly’? 5 Fast Facts You Need to Know

Ripa began her search for a new co-host on May 16 with Jimmy Kimmel, although he’s not a viable candidate since he already hosts his own late-night talk show on ABC. She has also welcomed Empire star Jussie Smollett, Cedric the Entertainer, ABC World News Tonight anchor David Muir, Hawaii Five-0 star Daniel Dae Kim, The Wonder Years star Fred Savage and singer Seal.

Andy Cohen, a good friend of Ripa’s, also filled in for a couple days, but he told Us Weekly that he’s too busy with his Bravo talk show Watch What Happens Live to replace Strahan permanently.

For the week of June 6, Ripa will be joined by D.L. Hughley on Monday, Joel McHale on Tuesday and Wednesday, Ryan Seacrest on Thursday and Baldwin on Friday.