Madonna, 57, is performing a tribute to Prince tonight at the 2016 Billboard Music Awards. In 1989, Madonna released a track with Prince titled “Love Song,” but there’s no telling if Madonna will include this in her BBMAs performance. Give the song a listen in the above audio video.

The choice of Madonna for the tribute was met with some controversy, but the show’s executive producer, Mark Bracco, defended the star with this statement to the Associated Press:

Listen, I think everybody is entitled to their opinion and everyone can have their own opinion, but I will say that we are honored and could not be more excited for Madonna to be on the show and to pay tribute to someone that was her friend and her peer and her colleague. I think it’s going to be fantastic.

Madonna’s being involved in the tribute to Prince even sparked a Change.org petition. As for what Madonna has planned for the set, the details are being kept quiet. Even so, Bracco revealed:

It’s going to be very, very intimate and very respectful, and I think it’s something that is really going to pay tribute to Prince as the incredible, groundbreaking artist that he was and the influence that he had on music.

What is most interesting is that it was actually Madonna’s team who approached the show about doing the tribute. Bracco explained:

Honestly her team gave a call and inquired about what we might be thinking about and it led to many conversations about what would she want to do and how would we want to shape it creatively. And after everyone (got) comfortable with exactly what the direction was, we all collectively wanted to go into Madonna, that she would do this and she has been very, very involved in how this will all unfold creatively.

" I have ceased distinguishing between the religious and the secular, for everything is holy: our courage and humility, our senses both lost and found; our love and our lust…all that shall swoon and couple, leaving in their wake the real hope that, late as is the hour –with as much as we have been given and squandered; as little as we might deserve it, though we stomp and plead— there may yet be more on offer: God willing, just one more song sung into high rafters before we are finally called to quit and disperse" Joe Henry ❤️#rebelheart

Check out this 1989 interview with Madonna below where she talks about trying to be a positive influence on Prince as he was living an “isolated life.” Madonna also praises Prince for his talent and says she’s a fan of his.

Prince passed away on April 21, 2016 after being found unconscious in his Minnesota home. 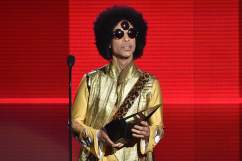