Last month, the world lost one of the biggest icons in music – Prince. Tonight, Madonna paid tribute to Prince at the 2016 Billboard Music Awards. The set began with a brief clip of Prince’s song “Let’s Go Crazy,” with Madonna making her first appearance by spinning around in a purple chair, donning a lavender suit that was very emblematic of Prince’s style. Madonna then began to sing Sinead O’Connor’s “Nothing Compares To You,” which was written by Prince. In the background, pictures of Prince flashed across the big screen, along with other images.

Following “Nothing Compares To You,” Madonna brought Stevie Wonder out on stage to sing “Purple Rain.”

According to the show producers, it was Madonna’s people who contacted the show about her performing the tribute. When the news was initially announced, it was met with some controversy and there was even a petition against it on Change.org.

In 1989, Prince and Madonna released a duet titled “Love Song.” 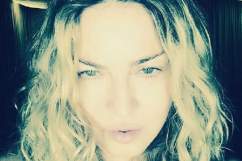