Kelly Ripa started off the show by pulling out Michael Strahan’s chair. On every show, Strahan pulls out Ripa’s seat for her. The two came out holding hands and Ripa was more smiley than ever, with her arm hugging around Strahan. Ripa then said to the audience that it’s Friday the 13th, not to take it as a bad sign. Strahan then said that he was “feeling the family” in the room and is always available if the show wants him to co-host. Ripa then joked that he can always co-host for her and that she’s going on vacation again in a couple weeks. Strahan then laughed, “Too soon?”

As far as a send-off for Strahan, he said he didn’t want to make it a big deal, so the show just aired flashback footage in tribute during the episode. First, Ripa and Strahan checked out a montage of clips of the best host chats from the show. Host chats are the 20-minute segments at the beginning of the show when the hosts just chat about their lives and what’s going on in the world. One of the clips was of Ripa and Strahan trying jelly beans and Strahan ended up eating a “dog poo” flavor. There was also a major flub shown of when Strahan mistakenly gave away an $8,000 to a viewer who had actually gotten a trivia question wrong.

Matt Bomer was the first guest on today’s show and he took a moment to praise Strahan as well as Ripa. Bomer stated that Strahan always conducts himself with respect and generosity, almost trying to make sure viewers know that Strahan is not a bad guy in his “departure scandal” situation. Bomer also fawned over Ripa, saying that she’s an amazing host and has never looked so beautiful. Bomer and Strahan appeared in Magic Mike 2 together.

Later on in the show, there was a montage of clips showing Michael Strahan and Kelly Ripa’s funny moments together, unforgettable episodes and videos of Strahan trying to speak in different accents.

To close the show, Strahan was presented with several gifts including a photo book of show memories. And, Ripa gave a champagne toast to Strahan at the very end of the show in his honor. In response, Strahan turned to the audience to thank viewers for their support and acceptance over the years. While Strahan was still speaking, he was actually cut off by credits and music, having to wrap up his speech quickly. He ended things by telling Ripa he loves her, putting his arm around her waist and kissing her.

On Monday, Jimmy Kimmel will be appearing as the first guest host after Strahan’s departure. 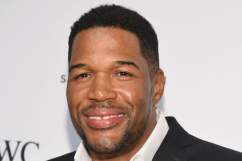