One question has been lingering all season on Rosewood: will Rosie and Villa get together? Sure, he has a complicated relationship with women in general, but fans noticed the tension between Rosie and Villa from the get-go. Last week’s episode began with Erica asking Rosie to move in– she thought they were ready for that step.  But we all know Rosie, and he was hesitant about it. In the midst of the drama, his ex-girlfriend, Dr. Aubrey Joseph, showed up to ask for his help in locating a missing patient. Several pigs and one killer impersonator later, cut to a conversation between Erica and Rosie, where it’s made clear to her that Rosewood is, in fact, in love with Villa, and she breaks up with him.

But will Villa and Rosie actually get together? In the season finale of the show tonight, the partners in crime will be involved in a serious investigation, but all may not end well. In the trailer for tonight’s episode, we see Villa asking Rosie if she wants to “get together this weekend”, and he (of course) responds by saying “yes.” We’re teased by the prospect of the duo getting romantic when Villa seductively leads him off into what we assume is her bedroom. But because of some newfound evidence, Rosie will be forced to leave Villa behind and undergo his own investigation. What he learns could threaten the chances of the couple ever ending up together.

Sometimes it takes someone else to point out what's right in front of you. #Rosewood

A pretty consistent theme this season has been that relationships are extremely turbulent, and TMI and Pippy have certainly had their fair share of ups and downs. Last week, TMI kissed Mitchie, and Pippy witnessed it all. On tonight’s finale, they will have a conversation about the incident. So, while we’d hoped that our favorite couples (and potential couples, for that matter) would all live happily ever after, it seems that may not be the case.

The season finale will air on FOX at 8pm ET/PT, and 7pm CT. 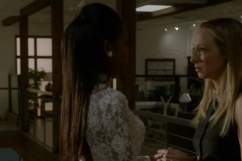 ‘Rosewood’ Season 1 Finale: What Time & Channel Is It On?