All good things must come to an end and so it is for The Good Wife. The CBS drama aired its series finale on Sunday, May 8 after seven critically acclaimed seasons.

Circling back to the beginning of the series, Alicia (Julianna Margulies) was once again standing by her husband Peter (Chris Noth) during his most recent corruption scandal (and another possible affair). But Alicia was no longer the scorned housewife. She was on the verge of divorcing her husband and starting a new life with her lover, Jason (Jeffrey Dean Morgan).

Creators Robert and Michelle King took the last four to five episodes to say goodbye to its other all-star cast members including Diane (Christine Baranski), who is starting an all-female firm; Cary, who quit the firm; Eli, who remained loyal to Peter until the very end; and David Lee, who threatened to file an E.E.O.C. complaint against Diane’s new firm in the penultimate episode. They also paid final tribute to the NSA storyline, Peter’s mother Jackie (Mary Beth Peil), Alicia’s adversary Louis Canning (Michael J. Fox) and their satirical show-within-a-show, Darkness at Noon.

Here’s what you need to know about The Good Wife series finale.

Diane Delivers the Second Slap Heard Around the World

One of the most talked about moments in The Good Wife history is the slap Alicia laid on Peter after he announced his resignation from the State’s Attorney in the pilot episode. Diane’s epic smack at the end of the series finale may have landed even harder.

Alicia wanted to discredit Kurt McVeigh’s testimony in her husband’s case, but Diane, Kurt’s wife, wouldn’t allow him to take the stand against. Despite her protest, Alicia went behind her back to get Lucca to question McVeigh and ask if he had an affair with his protege, Holly Westfall, right in front of Diane. The senior attorney walked out of the courtroom before her husband answered whether he cheated on her.

So when Diane found Alicia in the back hallway after Peter’s resignation of the governorship, she didn’t hesitate to slap her hard. The hit stung, but Alicia pulled herself together and walked away with her head held high.

The idea to bookend the series as it began started to evolve during the second season when the Kings felt confident CBS would keep the show on long enough to tell a story that had a beginning, a middle and an end.

Once we realized that CBS was liking it and they would keep us on, we started working towards something that is very hard to do in network because you’re doing so many episodes, which is create some shape and structure in the series. And allow that with having Alicia being the woman standing behind her husband in the beginning of the show, and at the end again and seeing how many changes there were in the middle.

His wife Michelle added, “And not only that, what does it really look like at the end? Is it the same ‘stand?'”

Will Gardner Returns to Point Alicia in the Right Direction 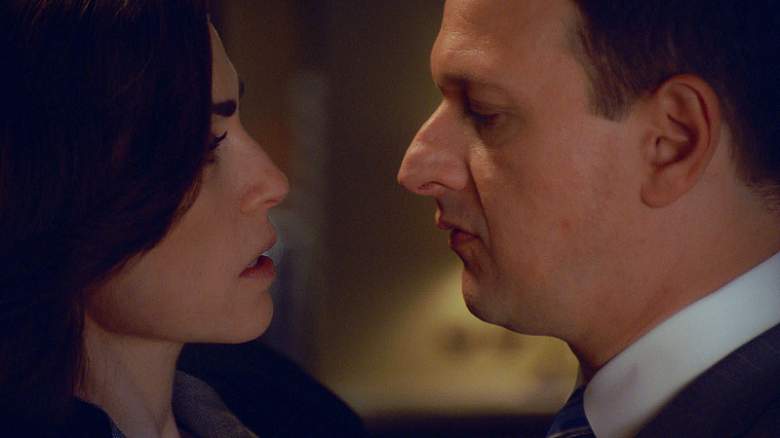 Josh Charles reprised his role as the late Will Gardner to help Alicia realized what she wanted from the rest of her life. (CBS)

For a moment, it seemed the Kings had brought back Josh Charles as the deceased Will Gardner only to film one more fantastic make out scene with Alicia. And, yes, that would have been worth it, but what audiences got was so much more and a satisfying conclusion the love affair that never really got its shot.

While pulling an all-nighter working her husband’s case, Alicia started to imagine the scenarios of who she wanted to come home to every night after work. At first, she found Jason in her kitchen and gave him a kiss. Then she found Peter, and kissed him. But the third and final man she wanted to see at the end of the day was the one who got away — Will.

The memory of him and imagined conversations with him, helped Alicia finally see what she wanted in her life. He reminded her about a precedent to use in her case. He pointed her to the man she most wanted to be with that wasn’t him, unfortunately. Before she put him to rest, Alicia told Will that he would always be her forever love and he responded that he’d be okay with that.

Alicia worked her magic to get AUSA Connor Fox to get an incredible plea deal for Peter. In the course of the hour, the deal went from two years in prison to four years in prison to one year in prison and then the deal Peter eventually took, one-year probation and he resigns as the governor of Illinois.

Peter asks Alicia for one last favor (or so he says), to stand beside him on the podium as he announces his resignation. She does her spousal duty, holding his hand in front of the press, but bolts from the stage before he makes his own exit.

Alicia is also uncertain if she’s really willing to commit to Jason. In one of her imagined conversations with Will, she says he likes “boy things.” It’s a hurdle Alicia doesn’t think she can get over, but Will encourages her to go to him.

But the Kings leave Alicia’s relationship status with Jason unsettled. They last see each other when they go to visit Cary and then she leaves him a voicemail. She thinks she see Jason offstage at Peter’s press conference, but when she gets to the end of the hallway, she discovers its someone else.

The Education of Alicia Concludes 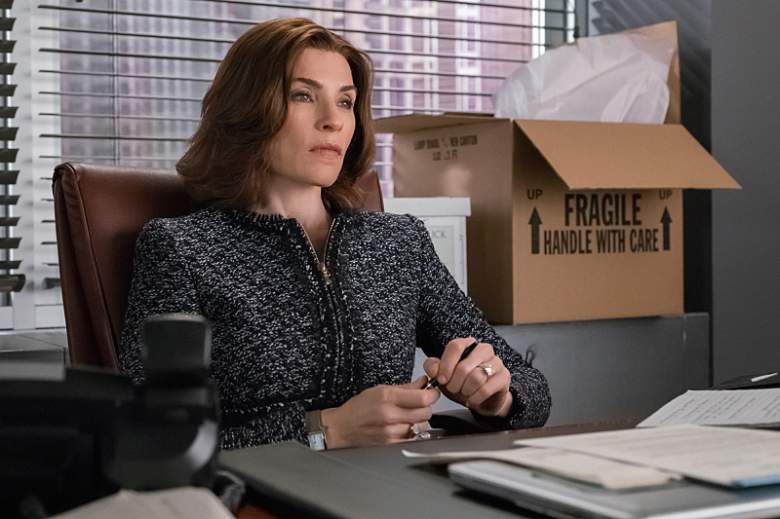 Alicia may be back in the same predicament with her husband’s situation, but she is no longer standing by her husband because she has no other choice. (Jeff Neumann/CBS)

The Kings have always said The Good Wife was about the eduction of Alicia. Her seven-season evolution has taken her from betrayed housewife to strong, independent woman whose making choices based on what she wants in life.

Margulies believed her character’s biggest change was that she stopped caring what other people thought, the actress told The New York Times. She showed such ambivalence when she put on the crocodile tears for Louis Canning and chose to stand by her husband one more time.

Co-creator Robert King described the change in Alicia to NPR:

She’s become more cynical, tougher, stronger, more powerful, funnier, my guess is. And within the last year or two I think she’s become a little sick of her children. … What I love about her is she feels very real in that way.

Is ‘The Good Wife’ the Last Great Network TV Drama?

Most network television these days is reality programming, over-the-top melodramatics and law enforcement procedurals. The serialized dramas have immigrated to the cable networks and streaming services with shorter seasons and more compelling stories. The Good Wife kept up their impressive storytelling over long, 22-episode seasons that rivaled shows like Breaking Bad and House of Cards.

With the end of the show, critics are asking if The Good Wife is the last great network TV drama. Yahoo TV’s Ken Tucker asked that exact question and could find nothing of comparison recently except for NBC’s Parenthood, which concluded last year.

Is there another serious, hour-long show on network TV that measures up to The Good Wife now, and how likely are we to get another one as excellent in the near future?… Certainly network TV hasn’t offered us anything in its traditional genres — the lawyer show, the cop show, the doctor show, the family drama — that’s come close to The Good Wife’s excellence. (Parenthood, you are once again so sorely missed.)

The Kings also took on the question in their interview with The New York Times. Robert said network TV shows struggle to “maintain a voice” over the course of 22 episodes, and Michelle praised the networks for doing stand-alone stories “really well.” She also cited the change in mindset of the actors working in television.

If it is an end of an era, and I don’t know if it is, it’s because of the actors. The actors, rightly, don’t want to work that many episodes if there’s an option. To do 13 or 15 episodes and have a life, and do your best work, I think a lot of stars are now saying that’s where I’d like to live, please.