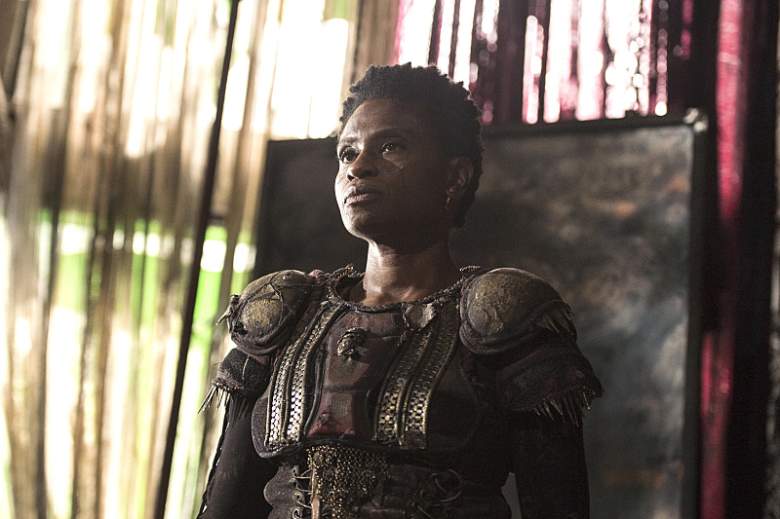 Indra was strangely absent from the finale. (Cate Cameron/The CW)

Fans loved the season three finale of The 100, but they did not love that Indra was missing, once again. The character has disappeared multiple times this season. At one point, she was supposed to be heading to Arkadia with Octavia, but she never made it. Tonight she was supposed to be fighting with everyone else, keeping the chipped people away from Clarke. But she wasn’t anywhere to be seen. What has the actress, Adina Porter, said about her mysterious absence? Take our poll at the end of this article and let us know where you think Indra is.

(This article will have spoilers through the Season 3 finale.)

Indra Was Mysteriously Missing from the Entire Episode

No one is quite sure if Indra lived or died during all the fighting on The 100 tonight. She was nowhere to be seen. The actress who plays Indra, Adina Porter, said on Twitter that she would be attending The 100 finale party. But when asked if her character would be making an appearance in season 4, she responded:

When this article was shared with Porter on Twitter, she responded with where she believed Indra was tonight:

Here! MT @PostApocalypt Where Was Indra in ‘The 100’ Finale? Here's what we know… pic.twitter.com/vFE83PvI3K

Her absence certainly didn’t go unnoticed by fans. It was mentioned briefly that she was alive and on one of the crosses, but that was it. Here are just a few tweets about her absence:

Indra is still chilling on the cross, we don't know if roan's dead or not, & where t'f is miller's dad #KeepingUpWithThe100Edition #The100

So……is Indra still up on a cross somewhere like… #The100 pic.twitter.com/u9c7A0eUj3

Um, someone go get Indra down from the cross, please? #The100

I am all for Octavia killing Pike. I would've preferred if Indra was there, or in the episode at all for that matter. #The100

Indra would have been a strong addition to the cast tonight. Her character also hated Pike and was pretty much competing with Octavia for the chance to send him to death’s door. But Indra also was wiser than Octavia when it came to sacrificing immediate needs for the bigger battle. So she likely wouldn’t have approved of Octavia’s actions if she had been there.

Right now, Adina Porter is also starring on The Catch. But that doesn’t necessarily mean she wouldn’t have been available for filming on The 100.

This isn’t the first time Indra mysteriously disappeared from The 100. Earlier this season, Indra was supposed to travel with Octavia to Arkadia, and she didn’t make it. No one said where she wound up. Porter turned the whole thing into a joke and started pretending that Indra was building a Grounder strip mall. Porter shared posts on Twitter such as:

If you’re still frustrated about Indra, you’ll appreciate this tweet:

Am I the only one that wants to know where Indra is?? Kane is still alive! Where the hell is she?? #the100 pic.twitter.com/nseHnVcSjN

Where do you think Indra is? Take our poll and let us know!