On tonight’s episode of Spartan Ultimate Team Challenge, marathon runner and amputee Amy Palmiero-Winters will be competing as part of Team One Step. The mother of two hails from Meadville, Pennsylvania, and has competed in multiple sporting events over the course of her lifetime– even after undergoing a surgery to remove her left leg.

Read on to find out what you need to know about the impressive athlete.

1. She Lost Her Leg In a Motorcycle Accident

In 1994, when Winters was just 22, she lost her left leg below the knee in a motorcycle accident. She wasn’t allowed to hit the pavement running again for three years after the amputation.

According to her foundation’s website, “[her] doctors tried everything to keep her leg intact including skin and artery grafts, and nearly 30 surgeries over three years.” Unfortunately, though, when her ankle fused, the best option was amputation.

When Amy first competed in a marathon after surgery, she ran on a prosthetic leg that was only intended for walking– she placed second in her division.

In 2006, Winters broke the world record at the Cleveland marathon by more than 25 minutes. Not long after, she ran in the Chicago Marathon, where she earned the best marathon time for a female below-the-knee amputee.

The long-distance runner also placed 1st in the 2010 New York City triathlon, 3rd in the Ultracentric 24 Hour Race, and 1st in the Long Haul 100 Mile Race. Other accolades include the ESPN ESPY Award for the top female athlete with a disability in the world, the 2010 Women’s Sports Foundation Wilma Rudolph Courage Award, the Challenges Athletes Foundation Trail Blazer Award, the Huffington Post Game Changer Award and the USA Strength Award.

As a kid, Amy competed in track and long distance running. In 2004, she finished second in her division in the Silver Strand Marathon– she was five months pregnant at the time. It wasn’t until 2009 that the athlete decided to switch from running the marathons most of us are familiar with (26.2 miles) to taking on ultramarathons– races that are more than 50 miles.The decision was a wise one, as Amy finished first in the female devision of the ‘Heartland 100 Mile’ in October of 2009. She also placed first at the 24-Hour Arizona Road Racers Run, where she ran 130.4 miles in total.

In 2010, Amy competed in the Ultramarathon World Championships in Brive, France, as part of the US ultrarunning team. She placed 18th.

4. Her Team Was Named After the Company That Customized Her Prosthetic Leg 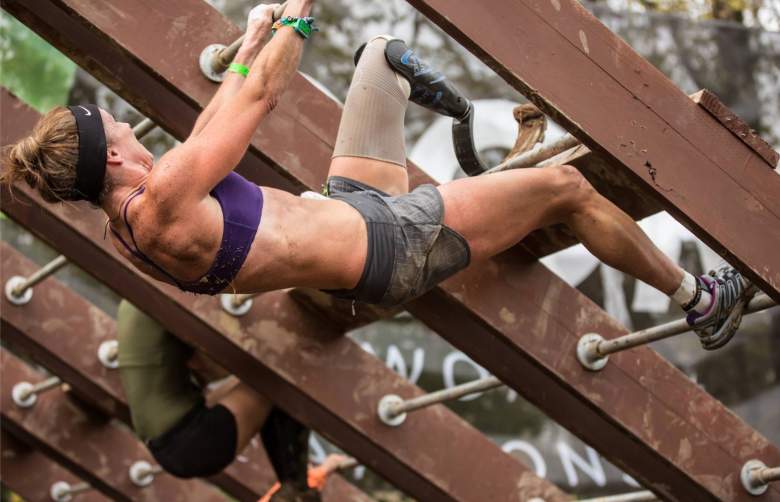 Amy’s success in marathons, triathlons, and ultra-marathons has made her a role model to young people with physical disabilities. Over the years, she has spent more and more time with children, “introducing them to sports and athletics as a way of helping them overcome their physical limitations.” Winters therefore decided to found One Step Ahead foundation to give children with physical disabilities the opportunity to “build self-esteem and self-confidence through athletics.”

Amy’s team on Spartan: Ultimate Team Challenge is named One Step Ahead in honor of her foundation, and consists of a math teacher, veterinarian, and former NBA cheerleader.

5. She’s Been named One of the Twenty Most Inspiring Runners in the US

In 2013, Amy was named one of the the “20 Most Inspiring Runners in the U.S” by dailyburn.com. The article that honored Winters acknowledged her work with One Step Ahead, who provided prosthetics to children who lost their limbs in the Boston Marathon bombings.

According to her website, “In 2011, Amy became the first female amputee to finish the Badwater Ultramarathon, which is described as “the world’s toughest foot race”. Tonight, she will take on a mile-long ultimate course and hope to advance to the finals on Spartan: Ultimate Team Challenge.

Read More
NBC, Reality TV
Amy Palmiero-Winters, a marathon runner who lost her leg in a motorcycle accident in 1994, will be competing tonight on Spartan: Ultimate Team Challenge.