"Ask for forgiveness not permission" #LessonsfromTRav

This season on Southern Charm, we’ve seen the ups and downs in Thomas Ravenel’s relationship with baby mama Kathryn Dennis. We have also seen a friendship between cast member Landon Clements and Ravenel. When Clements showed up at his home on their way to a party, he voiced how attractive he thought she looked.

Throughout the season, Dennis and Clements butted heads, especially when Clements purposely left her off the guest list for their friend Shep Rose’s birthday party. Dennis voiced her suspicions about Clements’ relationship with Ravenel and insists the two of them have had sex. Fellow cast members Cameron Eubanks and Whitney Sudler Smith have said that they do not think anything happened between the two. However, on the finale episode of the show, a Founders Ball attendee asks Rose if Clements will ever admit she had sex with Ravenel. This appears to shock Rose, especially since Clements previously declared her love for him.

On tonight’s part one of the Southern Charm reunion, Dennis states that she “knows for a fact” that Clements and Ravenel “hooked up.” She also reveals that the two went away together on a Valentine’s Day trip that was originally meant for Dennis. Ravenel steps in, fumbling his words, insisting that the two slept in separate bedrooms and have a purely platonic relationship. Check out a clip from the reunion below. 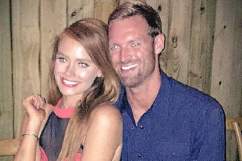 Who Was Kathryn Dennis Dating When She Got Pregnant With Baby Number 2?