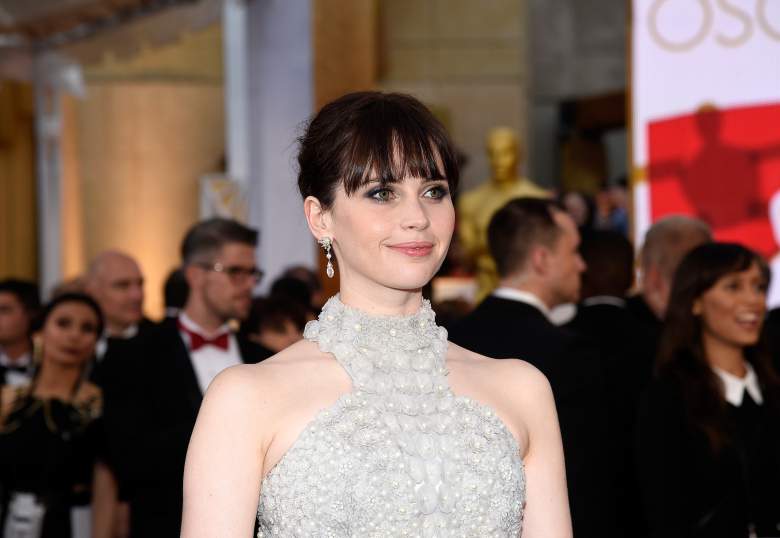 Felicity Jones, 32, is the star of Rogue One: A Star Wars Story, the first spin-off film in the Star Wars saga. She plays Jyn Erso, a rogue enlisted by the Rebel Alliance to steal the plans to the first Death Star before the events of Star Wars: Episode IV – A New Hope. Jones is an experienced British actress and already has an Oscar nomination. But this role will introduce her to an even wider audience.

In the new issue of Entertainment Weekly, Lucasfilm revealed more about Erso, who was first seen in the Rogue One teaser. “She has been detained [by the Rebellion] and is being given an opportunity to be useful. And by being useful, it may commute her sentence… She’s a real survivor. She becomes a kind of Joan of Arc in the story,” Lucasfilm president Kathleen Kennedy said of the character.

Here’s a look at the life and career of Jones.

1. Jones Went From Radio & Television to Movies & Immerses Herself in Roles 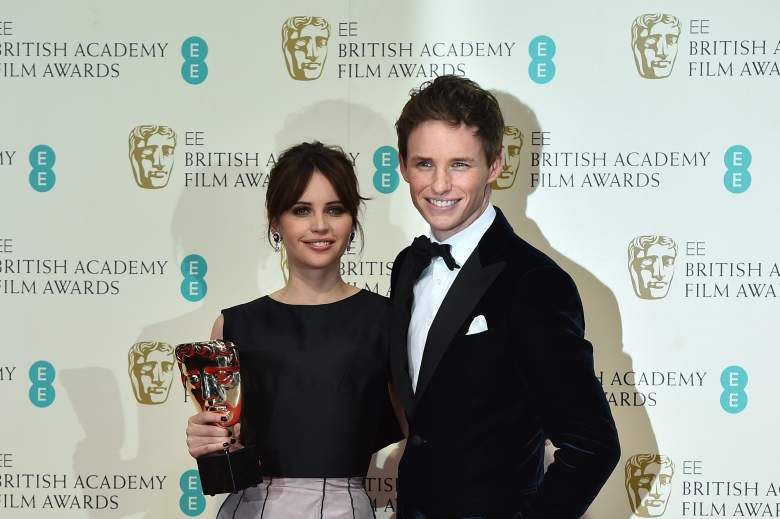 In 2014, Jones and Eddie Redmayne starred in The Theory of Everything. (Getty)

While it’s common for an older actor to say they got their start on the radio before transitioning to films, you don’t hear that too often about the younger generation of movie stars. But that’s the case for Jones.

Although she appeared in a TV movie called The Trouble Seekers when she was just 11 and then played Ethel Hallow in The Worst Witch and Weirdster College, Jones’ first big role was as Emma Grundy on The Archers, a long-running U.K. radio soap drama. She stayed in the role even while studying at Oxford and played the part for a decade.

Other early roles for Jones, before her breakout year in 2011, include Margot Frank in 2009’s The Diary of Anne Frank, 2008’s Brideshead Revisited and a part in a 2008 episode of Doctor Who.

Many of her early roles required costumes from the past, so she was happy to make Chalet Girl in 2011. She told the Guardian that it was “something of a relief” to play a modern girl. 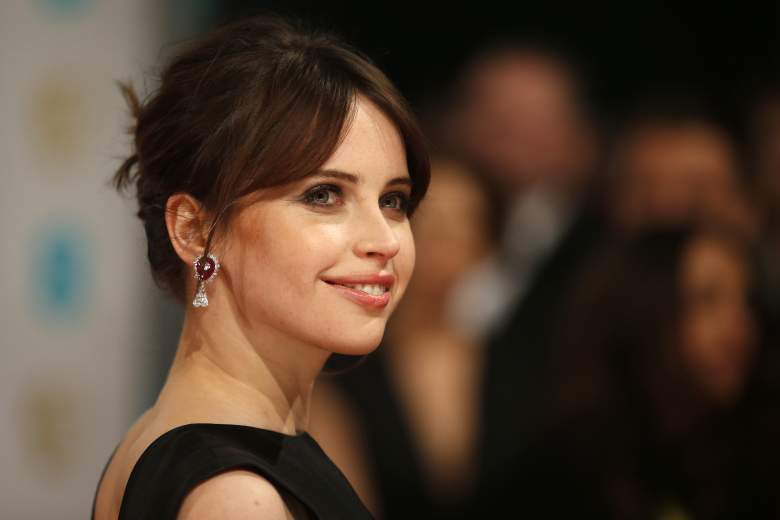 Felicity Jones was nominated for the Best Supporting Actress Oscar for The Theory of Everything. (Getty)

Jones studied English at Oxford. However, she once considered law instead.

“I’m so thankful I didn’t do that. I don’t know if I would have survived it,” Jones told her hometown newspaper The Birmingham Post. “It was my English teacher who recommended that I do English at university. I had a drama teacher called Miss Mulhearn who was so supportive.”

If she had gone into law, she wouldn’t have been able to develop her natural talent as an actress. Ralph Fiennes, who directed Jones in 2013’s The Invisible Woman, told Vogue that she is a “natural actress.”

“She is a totally natural actress who can open a window for the audience. Through her eyes she conveys a rich inner life, full of emotion,” Fiennes said.

In another Guardian interview, Jones said she really likes to get into a role. “Without sounding too pretentious, I feel my job is almost like becoming a monk or a nun – it’s a calling,” she said. She might have missed that calling if she went into law. 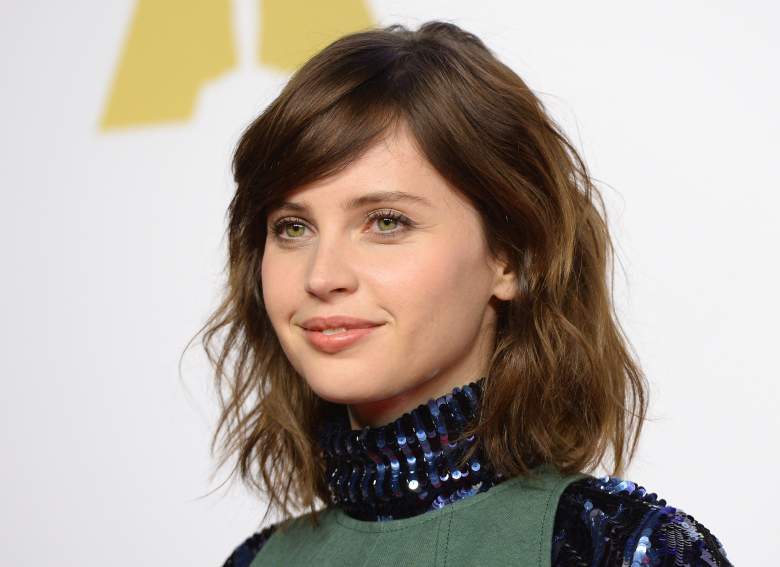 Jones caught the attention of Hollywood by starring in 2011’s Like Crazy with the late Anton Yelchin. Her performance garnered her critical acclaim and film festival awards. She was named Best Female Newcomer at the U.K. Empire Awards, won Breakthrough Actor at the Gotham Awards and picked up the New Hollywood Award at the Hollywood Film Awards. In 2011, Jones also made Chalet Girl.

“None of us were really expecting the film to be received in the way it was,” Jones told the Telegraph in 2012 about Like Crazy‘s response. “When I look back now, we were quite naive in a way. We put everything we had into making it, and it was very fast and totally all-encompassing and overwhelming. The fact that people like it has just stopped us in our tracks.”

Like Crazy was directed by Drake Doremus, who worked with her again in 2013’s Breathe In. However, Doremus decided to pick Kristen Stewart as the star of his next film, this year’s Equals. He told Collider in 2013 that he would still like to work with her again “on the right thing.” 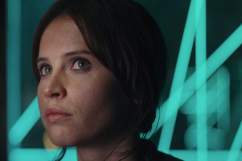 4. Jones Might Have had a Big Role in Sony’s ‘Amazing Spider-Man’ Universe 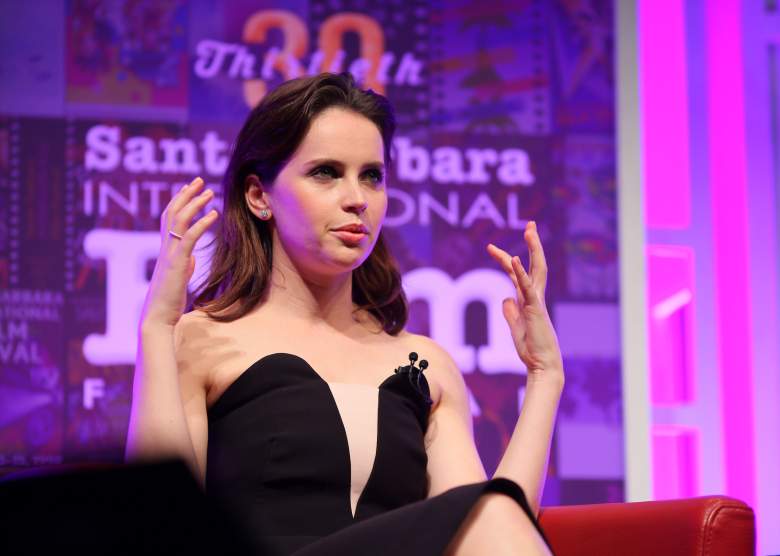 In an interview with GQ, Jones was asked about it. “Being vacuum-packed into a leather suit, doing backflips?! I’d love that,” she said. “Can you start a petition for me?”

However, by June 2015, she seemed resigned to the fact that she might never play the character. She told Clevver Movies that there were no plans, but would “love to play her.”

Jones as Black Cat was one of the casualties of Sony’s decision to ditch the Amazing Spider-Man universe. The studio agreed to work with Disney and Marvel Studios to bring Spidey to the Marvel Cinematic Universe and they’re working on Spider-Man: Homecoming. Tom Holland, who played Spidey in Captain America: Civil War, will be taking the role again.

Jones is still working in blockbusters though. In addition to Rogue One, she’s finishing up Inferno, the next film in Tom Hanks and Ron Howard’s Robert Langdon franchise. 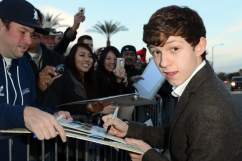 5. Jones Grew Up in a Single-Parent Home & Broke Up With Her Longtime Boyfriend 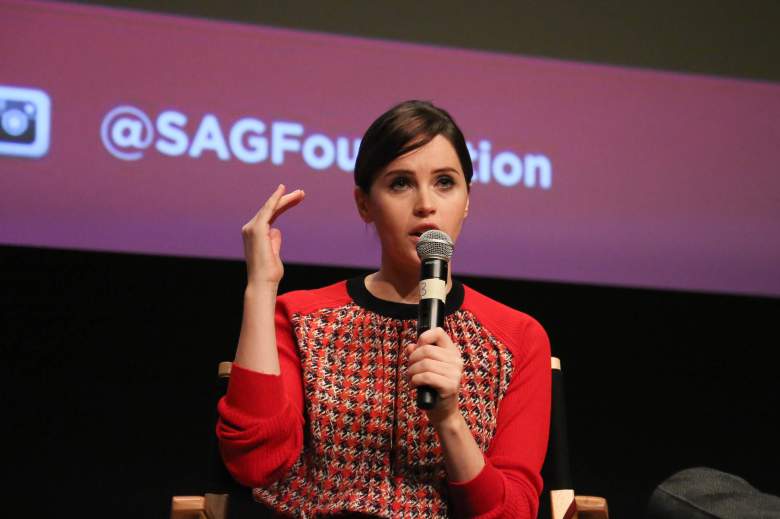 Jones at the SAG Foundation Conversations screening of The Theory of Everything in New York. (Getty)

Jones’ parents are Julia and Gareth Jones, who divorced when she was three years old. Her father was a journalist and her mother was in advertising. They met when working at the Wolverhampton Express and Star. She told The Guardian that she was brought up in a single-parent home with her brother.

“My mother worked in advertising and my father was a journalist,” she said. “But they split up when I was three and I grew up in a single-parent family. My mum brought my brother and I up.”

As for her love life, Jones was dating artist Ed Fornieles for a decade and lived together in east London. However, the two broke up in 2013.

“She’s very private,” Caroline Harvey, a filmmaker and friend of Jones’, told The Guardian of the actress. Harvey added that Jones is “really fun, and I’m looking forward to her picking films that are perhaps less heavy drama.”