You may be wondering why a new episode of American Ninja Warrior isn’t airing tonight at its regularly scheduled time. We’re sorry to say that the show has been moved to a new time– Mondays at 8pm. Tonight, there will be a repeat of the premiere episode in the place of a new one.

To find out more information about the show’s new air time, click here.

Season 8 switched to Mondays this past week, on June 13. Zach Gowen, a former WWE wrestler with only one leg, competed in Indianapolis, along with some America Ninja Warrior veterans like Meagan Martin, Lorin Ball, and Brian Arnold.

If you missed the show, you can check out the contestants who competed in Indianapolis right here.

To see which 30 advanced to the city finals, click here.

Next Monday, June 20th, they’ll be traveling to Oklahoma City to see who has it what it takes to move on to the city finals. 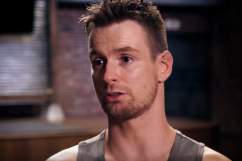