All for members of the Red Hot Chili Peppers crammed into Corden’s car for a legendary Carpool Karaoke segment that involved wrestling and rocking. They sang RHCP favorites like “Give It Away,” “Under the Bridge,” “Californication,” and new single “Dark Necessities” and then a song from the musical Oliver! (YouTube)

Talk show host James Corden is known for his hilarious click-bait sketches, and Carpool Karaoke is one the best examples of that. In the videos that almost always go viral, Corden picks up various celebrities and drives them around town, playing hit songs and, you guessed it, singing along. And when we say singing, we mean belting their hearts out.

The British-born Corden and face of The Late Late Show on CBS is actually a very talented singer, and played the Baker in 2014’s film adaptation of Into the Woods, so it’s only fitting that his most popular sketch involves singing. The videos air during his show and have featured guests like Demi Lovato, Mariah Carey, Carrie Underwood, George Clooney, Lin-Manuel Miranda, Stevie Wonder, Adele, Jason Derulo and One Direction. In addition to singing, he conducts his interviews during the ride, as well.

Oh, and, do you mind if we listen to some music?

Of course, Corden recited the words of “Hello” when calling to pick up Adele
. Seeing as they are both Brits, they filmed this one in their homeland, which is why Corden’s driving on the other side of the road. After singing a few Adele hits—during which Corden harmonized with the amazing singer, blowing her away—they rocked out to a Spice Girls song and rapped some Nicki Minaj. (YouTube) 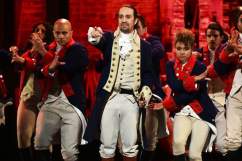