Everything you need to know about Longclaw and Jon Snow. (HBO)

Jon Snow’s Longclaw sword has been the subject of much speculation, since the sword has been featured so heavily on Game of Thrones. Find out everything there is to know about Jon’s sword and the role it might play in the future. This post will contain spoilers through Season 6 Episode 9, and it will be updated after the finale airs.

Longclaw is a Valyrian steel sword. (Learn more about Valyrian steel here.) When Jeor Mormont took the black, he passed the sword along to Jorah Mormont. But when Jorah went into exile, he sent the sword back to his father, Jeor, at the Wall. When Jon Snow saved Jeor’s life against a wight, Jeor gave Longclaw to Jon as a reward. He replaced the bear that was on the sword with a direwolf in honor of House Stark, who had lost its own Valyrian sword, Ice, to the Lannisters. You should note that there is some speculation and controversy surrounding Longclaw’s true origins. Check out this detailed blog post about Longclaw’s secret origins for more information.

Longclaw’s History in the ‘Game of Thrones’ TV Show

Jon lost Longclaw several times, perhaps not truly understanding its importance. In Season 1, Craster took Longclaw briefly after Jon followed him into the woods to find out what he did with his sons. In Season 2, when Jon was captured, Ygritte would sometimes whack him on the head with the flat side of Longclaw, jokingly. Jon later killed Qhorin, a wildling, with Longclaw — his first time killing a human.

Longclaw vs. the White Walkers 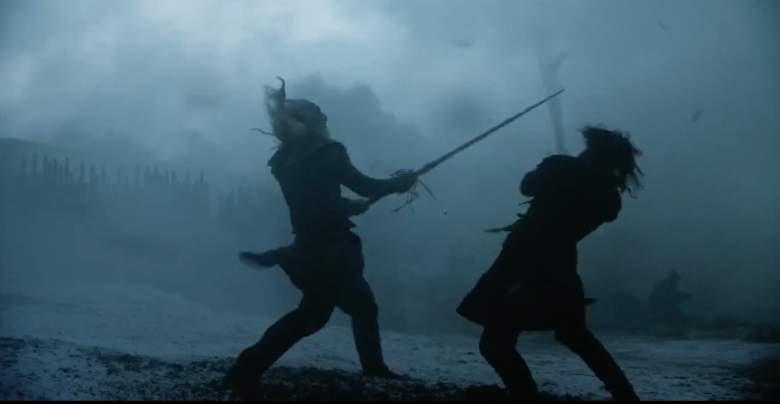 In the Season 5 episode “Hardhome,” we get the first idea of just how powerful Valyrian steel swords can be. The White Walkers and their ice blades can cut through anything. But when Jon duels with a White Walker while wielding Longclaw, his sword doesn’t break when it hits the ice blade. He is then able to shatter the White Walker with his sword, showing everyone for the first time that something besides dragonglass can kill White Walkers.

Ever since, Longclaw has been integral to Jon Snow. Sam is going to the Citadel to research Valyrian steel and dragonglass more. Meanwhile, Jon used Longclaw in the Battle of the Bastards, in many epic scenes.

Longclaw is a beautiful creation pic.twitter.com/KzLR4kmGsr

There’s a theory running around the fandom that Longclaw is actually a long-lost Valyrian steel sword called Blackfyre. This theory comes from the books, not the show. What we know is that the Targaryen sword Blackfyre, originally wielded by Aegon the Conqueror, was taken by Daemon when he rebelled. But the theory posits that Bloodraven got the sword after defeating Daemon. He then gave the sword to Aemon to pass along to the Prince That Was Promised. Read this Reddit discussion to see the theory in more detail.

In one of his blog responses, George R. R. Martin said that Longclaw wasn’t Blackfyre, but this hasn’t stopped fans from believing that he may still decide to make that happen. However, he did not answer whether Longclaw might be Dark Sister, another Valyrian steel sword.