Mace Tyrell was a kind-hearted soul who raised two loving, kind-hearted children. Fans are talking about him on social media after the Game of Thrones finale, and we're gathering some of the best comments, tweets, and memes. SPOILERS below and on the next few pages. So don't read on unless you've already watched the Season 6 finale, "Winds of Winter."

Goodbye, Mace Tyrell. We barely knew thee. The nicest, most well-meaning Lord of the seven kingdoms died in the season six finale as he and his children were burnt to a crisp so that Cersei could escape justice. It was a sad and fitting end to the well intentioned but naive Mace Tyrell.

People flocked to Twitter to express their thoughts on his passing. Click through the gallery to read all the best tweets and memes about Mace Tyrell.(HBO) 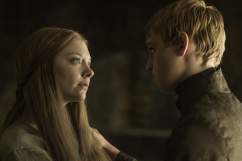 Margaery on ‘Game of Thrones’: All the Memes You Need to See

Read More
Game Of Thrones, HBO, TV
Mace Tyrell played a special guest role on the Game of Thrones finale. See all the best memes, tweets, and reactions about him.