Tonight is the finale of ESPN’s O.J.: Made in America. The 7 hour and 43 minutes documentary began its run Saturday, June 11, on ABC, and will culminate tonight, June 18, in a two-hour finale on ESPN.

O.J.: Made in America has gained vast praise for not only investigating new aspects of the murder case itself, but for situating it in the midst of OJ’s celebrity and mounting racial tensions in the Los Angeles area. Above the Law writes, “One of my criticisms of The People v. O.J. Simpson was that it failed to show why Simpson was so beloved and had such broad mainstream appeal… O.J.: Made in America does not fall into that trap. The series spends almost two episodes on Simpson’s life before the trial. It depicts Simpson’s ease in front of the camera, which enabled him to become more than just a football star.”

Read on to find out more about the show’s schedule– where and when you can watch the finale, and how you can check out some episodes you may have missed.

STREAM NOW: You can stream all five parts of the documentary right here, through WatchESPN. (ESPN made this option available on June 14).

DVD: The five-part series will be available on DVD on July 19. You can preorder it here. 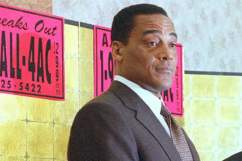