This year, you can swim with the sharks thanks to Discovery VR.

For the first time ever, Shark Week is going 3D.

During Shark Week 2016, which starts Sunday, June 26, the Discovery Channel will make portions of the broadcast available in Virtual Reality and 360 video. Perfect for the curious but not necessarily adrenaline junkies, this will make it possible for viewers to swim with sharks without actually risking their lives. The best part is, it’s all free.

This year’s programming will consist of eight days of underwater coverage, featuring a slew of new programs, specials, documentaries, and movies. In it’s 29th year, Shark Week is breaking through technological barriers with the VR content. And this isn’t even the first VR experience from Discovery.

If you’re not quite ready to swim with the sharks but want to dip your toes, use our guide to experience Shark Week 2016 in VR (and if that’s still a little too scary for you, try 360 video, that’s a little less invasive).

The most important part of this is that you must have VR gear in order experience the VR portions (not the 360 videos). Once you’ve got your gear hooked up, follow these steps. 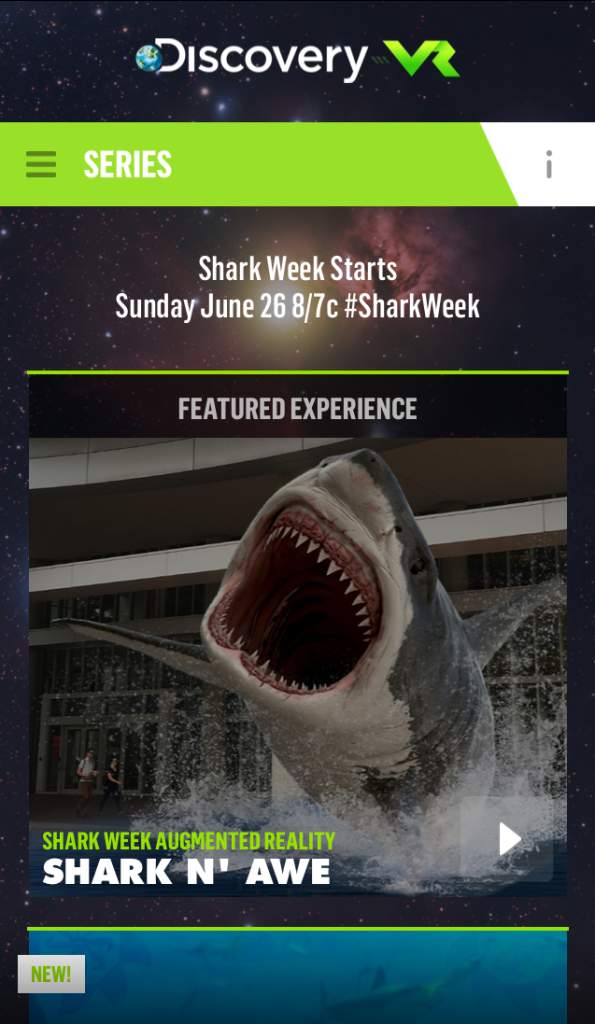 3. Select the video you want to be immersed into. Most videos come with two options, the larger option is usually the one that will allow you to actually feel like your swimming with the sharks.

The following videos will be posted on the apps and websites mentioned throughout Shark Week. Some are already available.

1. Isle of Jaws: This Shark Week special airs on June 26, from 10 – 11 p.m. EDT. On-air messaging in the first act will invite VR users to test the waters, giving them the option to watch the second act through Discovery VR on Facebook and Gear VR. In the virtual reality experience, viewers will go along the known great migration route for great white sharks. Spoiler alert: You’ll eventually stumble upon a concentration of male great white sharks off an unchartered island.

2. Surviving Sharks: Even after personally being attacked by sharks, Australian Navy diver Paul de Gelder hasn’t let the danger keep him from diving into the ocean depths. Join him underwater as he shares his personal story of survival and introduces him to his close friends–and sometimes foes.

3. Dare to Swim in The Shallows: Shark Week has partnered with Sony Pictures’ The Shallows, starring Blake Lively. This video places the viewer in the middle of curious great white sharks who don’t shy away from the camera.

4. Sharks Among Us: A New Way: Marine biologist Dr. Craig O’Connell takes viewers on a special dive at his favorite sites in Bimini, Bahamas. This VR experience will supplement the special, Sharks Among Us, which airs Monday, June 7, 10 – 11 p.m. EDT.

6. Sharks Among Us: Getting the Shot: This year, viewers will get to see what it takes to get the perfect shark shot. Dive in and be in the middle of the action by going behind-the-scenes in Bimini, Bahamas with Dr. Craig O’Connell and the crew of Sharks Among Us.

7. Shark Pups: Not exactly as thrilling, this Discovery VR experience features puppies dressed as sharks. Viewers will be immersed in a simulated underwater world of cuteness at the Washington Animal Rescue League, where Shark Pups recreate some of Shark Week’s most iconic moments.