Oprah Winfrey and her longtime partner Stedman Graham rarely makes public appearances together, but the 64-year-old businessman has stood loyal by her side for 30 years. Although the couple has never exchanged vows, they are one of the longest lasting relationships in Hollywood.

After her speech a the 2018 Golden Globes, rumors that Winfrey might run for president of the United States in 2020 have surfaced. This has reignited an interest into Winfrey’s personal life, specifically her relationship with Graham.

While Winfrey built her media empire, Graham found his own business success as the chairman and CEO of S. Graham & Associates, a Chicago-based management and marketing consulting firm. He also serves as a public speaker around the country and the world as well as writing 11 books on personal identity.

1. Graham Believes If He Had Ever Married Oprah, They Would Not Still Be Together Now

Graham and Winfrey have been together since 1986 and the former talk show host took a moment to boast about their 30-year relationship on Instagram in February, which she rarely does. “Stepping out with my Valentine of almost 30 yrs!” she captioned the photo below, taken at music producer Jimmy Iovine’s wedding to British model Liberty Ross.

Stepping out with my Valentine of almost 30 yrs! #iovinewedding

The couple never got married, but did get engaged in 1992. She thought about tying the knot after attending Tina Turner’s wedding in 2013, but told Access Hollywood she will likely die a “never-married” woman.

“I think that it’s interesting that you would ask it because I thought about it again at Tina Turner’s wedding, because Tina was like, ‘Oprah, you need to do this. You need to do it.’ I was just thinking, ‘Well, OK, would things really be different?’ And no, I don’t think so.'”

Winfrey also admitted that she isn’t sure if she could handle the responsibilities of being a wife. She joked, “First of all, you’ve got to come home sometimes.” If they had ever gotten married, Graham believes that would have been the beginning of the end for their relationship. She told Access:

“If you ever interviewed him, he would tell you that had we married, we would not be together today. Because he’s a traditional man and this is a very untraditional relationship.”

2. He’s a Proud Father and Grandfather.

Graham became a grandfather in May 2015 when his only daughter Wendy, 41, gave birth to her daughter, Cadence. She married the father of her child, Trinidadian engineer Bradley Kerwin Greene, who is 13 years her junior, two months earlier on March 28 in Chicago. Wendy also works at her father’s marketing and management company and previously worked for Winfrey’s Harpo Productions.

After her parents’ marriage ended, Wendy grew up shuffling between her mother Glenda’s home in Texas and her father’s place in Chicago. She was previously engaged to Sherman Galbreath, but in 2002, he drowned to death, according to Daily Mail. The fatal incident occurred while the couple was on vacation in the Virgin Islands and Wendy was teaching her fiancé how to swim.

Sadie, Sunny, Lauren waiting for dinner with their Snoods on to keep their ears out of the food bowl.

Graham and Winfrey have no children of their own. They have always treated their pets as their kids.

Several years after his divorce to Glenda, Graham had a three-year relationship with Chicago TV news anchor Robin Robinson from 1982-1985. When he proposed to Winfrey in ’92, Robinson told People Magazine at the time that her ex-boyfriend likely waited six years to propose because he was gunshy after his first marriage failed.

The general ill-informed opinion is that Oprah didn’t want to marry him. I would question that speculation. He was hurt by his first marriage not working out, and he doesn’t like making mistakes.

3. Graham Teaches Everyone from World Leaders to Small Business Owners How to Develop a Personal Identity.

Graham is the chairman and CEO of S. Graham & Associates, a Chicago-based management and marketing consulting firm that specializes in corporate and educational markets, according to his website. He travels around the country and the world delivering his message of identity to corporations, professional associations, government and civic organizations, colleges and universities, and community groups.

Winfrey’s partner’s net worth is estimated at $10 million compared to Oprah’s 3.2 billion, according to Celebrity Net Worth. In addition to his company, Graham written 11 books on identity development and marketing. On the subject of identity, his website reads:

“Part of what makes us human is our ability to be aware of our own existence, to both live and to reflect on our own lives. It is this capacity for self-awareness that allows us to see our authentic selves and build our own identity, rather than letting others dictate who we are and what we do with our lives. Inevitably, however, the stresses and routine of daily life can get in the way of this self-reflection.”

4. Winfrey’s Ex-Stepmother Claimed Graham Was ‘Like an Old Shoe’ to Oprah and Never Saw Any PDA Between the Couple. 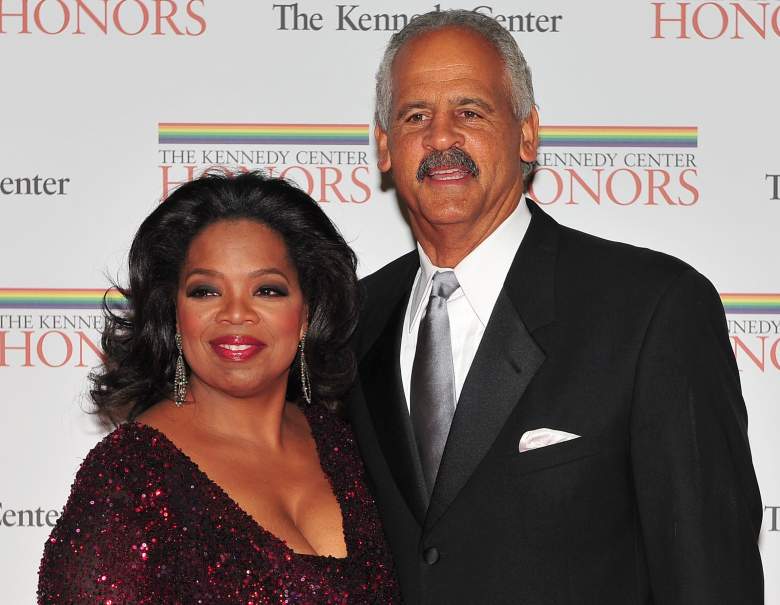 Winfrey’s ex-stepmother Barbara Winfrey gave a bizarre to the Daily Mail in April 2014 that dished a ton of gossip on her former stepdaughter, her best friend Gayle King and Graham. Barbara Winfrey believed the relationship between King and Winfrey was “unhealthy” and she didn’t know any man, but Graham, who would tolerate a woman’s best friend being ever present.

Among the claims Barbara made her interview to the Daily Mail were:

No HohoHo just A Splashing Christmas our house to yours! ???

Graham’s niece Courney, the daughter of his sister Anita, was shopping a tell-all book in January 2015 that would have exposed secrets of her uncle’s relationship with the former Queen of Daytime TV, according to the National Enquirer. She claimed the media attention that Winfrey brought to Graham’s family wasn’t detrimental.

“I was very shocked at the picture she painted of her family. She describes – in a written pitch – Stedman’s ‘abuse’ toward his family and how Oprah turned a blind eye to everything! She also claims some members of her own family treated Stedman’s daughter from a past marriage very badly,” a source told the National Enquirer.

Graham grew up in Whitesborno, New Jersey among five brothers and sisters and his parents, father Stedman, a painter, and mother Mary, a housewife, according to People. He played college basketball at Hardin-Simmons University in Abilene, Texas and graduated in 1974 with a degree in social work. He also attained a master’s degree in education from Ball State University in Indiana.

Graham served in four years in the U.S. Army, according to CNN. He also played professional basketball in the European League.