Tonight is the Season 4 premiere of The Fosters, and the show will open when a potential school shooter puts Anchor Beach Campus on high alert. According to The Fosters Spoilers, "The family drama’s writing team did exhaustive research in preparation for the harrowing episode, which finds Mariana fending for herself as the police search for her boyfriend and possible gunman Nick." Due to the nature of the premiere's events, two of the show's stars, Cierra Ramirez and Sherri Saum, will be giving a message to the victims of the Orlando attacks before the episode airs. Episode 2, on June 27, will focus on the subject of gun violence and trauma. Executive producer Joanna Johnson previously told TVGuide.com, "It almost seems like a weekly occurrence that someone is taking a gun to school. We wanted to explore what the impact of this has on our schools and has on our kids." Season 4 will premiere tonight, on Freeform, at 8pm ET/PT. (Getty) 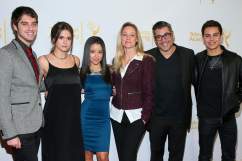 ‘The Fosters’ Season 4 Premiere: What Time and Channel Is It on Tonight?

Read More
ABC Family, Celebrities, Instagram, Teri Polo
Tonight is the Season 4 premiere of The Fosters. Meet some of the new characters who will be joining the cast this season, and get some spoilers right here.