Titi Pierce of Warner Robins, Georgia has filed a lawsuit against Ellen DeGeneres after the daytime talkshow host joked about her name. Pierce says DeGeneres mispronounced her name to make a breast joke. The segment originally aired with Pierce’s phone number visible and it was only later blurred when posted online. It was when the segment re-aired in April.

Pierce filed the federal lawsuit against Warner Bros. Entertainment Inc., which produces The Ellen DeGeneres Show, on June 2, over three months after the segment first aired.

Here’s what you need to know about Pierce and the lawsuit.

The segment at the center of the lawsuit, seen above, first aired on Ellen on February 22. It was then re-run on April 15. Pierce’s real estate sign was shown right after DeGeneres showed a sign for the “Nipple Convalescent Home,” which has nothing to do with Pierce. The picture of Pierce’s sign was sent to DeGeneres by a viewer in Warner Robbins. DeGeneres joked:

Titi Pierce… sounds like she might have spent some time in that nipple home, I don’t know.

DeGeneres pronounced Pierce’s first name as “titty,” but Pierce says the name is supposed to be pronounced “TEE-TEE.”

2. Pierce First Heard About The Segment While on Her Way to a Funeral 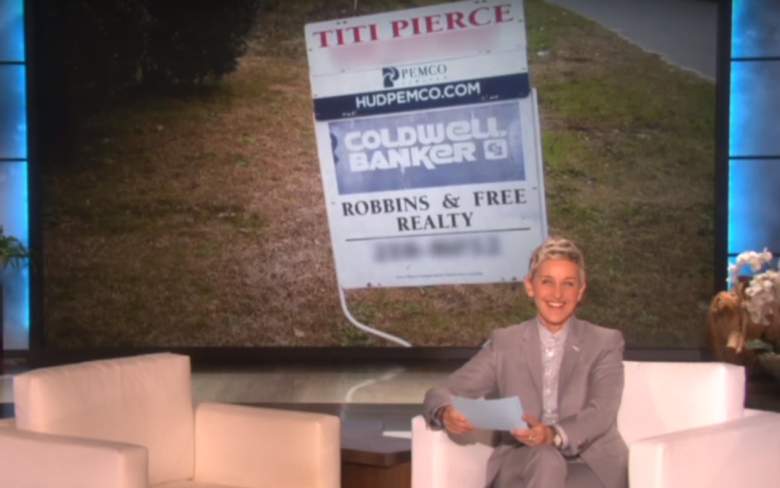 Pierce, 35, did not find out about the segment until after it aired, since she was on her way to Tampa for a funeral. According to the Macon Telegraph, Pierce began receiving phone calls during the wake and funeral. The lawsuit reads:

She answered several of the telephone calls and when she did, she was met with cruel voices laughing uncontrollably, asking if she was a real person, and repeatedly shouting “titty Pierce.”

Her attorney, Stacey Godrey Evans, said in a statement to Heavy.com that she is a very private person and feels that she was humiliated twice on national television. Her client also hopes to stop DeGeneres and other hosts from making fun of others in this way.

Ms. Pierce is a private and proud person and this ordeal has been very difficult for her.
She was ridiculed on national television while her personal cell phone number was broadcast to the world. She received hundreds of telephone calls and texts, many very vile and hateful. She is a real person, with real feelings, and the show should have been more thoughtful before it smeared a private person on national television.

Her colleagues at the agency also fielded phone calls and did make a statement on Facebook in February when the segment first aired. The statement read:

Loving that our own Titi Pierce of CBRF was on the Ellen DeGeneres show, but wish it was because they knew how fabulous and classy Titi is and not to poke fun. We love you Titi and are proud to have you in the CBRF Family !!

Pierce also works at Robins Air Force Base as an electronics engineer.

4. Pierce’s First Name Is a Nigerian Name That Means ‘Flower’

According to the Telegraph, Pierce says in her lawsuit that her mother named her “Titi” after a Nigerian name that means “flower.” She claims that no one has ever made fun of her name like DeGeneres did and that her mother chose the name from a book of Nigerian names a good friend gave her.

“Mrs. Pierce has strong, positive feelings toward her name for that reason,” the lawsuit reads.

She claims in the lawsuit that the segment was an invasion of privacy and inflicted emotional distress. She is seeking unspecified damages and wants Warner Bros. to pull the semgent from online and stop distributing it.

Pierce claims in the lawsuit that she contacted the show’s producers twice after the segment aired, first on February 24 and then on March 14. Again, the show did blur out her phone number online, but aired an un-blurred version in April. Pierce says that she sent the producers a cease and desist letter.

Also in the lawsuit, Pierce claims that the joke of her name would not have even been funny without the mention of the Nipple Convalescent Home before it. She also claimed that DeGeneres was connecting her name to nipple piercing. 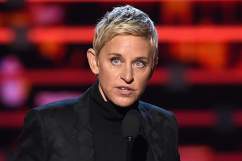 Ellen DeGeneres’ Net Worth: 5 Fast Facts You Need to Know