After Donald Trump‘s response to the Orlando shooting and his criticism of Judge Gonzalo Curiel, high-ranking Republicans have tried to avoid talking about him. On Late Night with Seth Meyers, the comedian took a look at how Republicans have done this.

Meyers then shifted to what might get Trump to drop out of the race. A former Trump advisor told Politico last week that “if someone offered him $150 million to drop out, he would.” When asked if Trump would really do that, another former advisor said, “Yeah, probably.”

During his rally in Phoenix, Trump said that he wouldn’t even consider that, but if it was $5 billion, he might.

“Now based on everything I read in The Art of the Deal, I’m thinking we could put this thing to bed for $2.2-2.3 billion,” Meyers said. “And, I’m being serious, I think we could get Mexico to pay for that.”

Meyers also offered Trump his own NBC show, called Chicago President. “Think about it Donald. All the fun of being the president, none of the responsibility.”

Matt Goldrich, one of Meyers’ writers, also appeared on Late Night to criticize Meyers’ liberal hit pieces and explain why a conservative might support Trump. 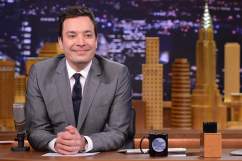 ‘Tonight Show Starring Jimmy Fallon’: Who Are the Guests for the Week of June 20