The pair began simple enough, singing along with Gomez’s “Same Old Love” to begin the Carpool Karaoke. Then Gomez suggested Cordon loosen up – by going on a roller coaster. While Gomez continued singing her hit “Come and Get It” on the coaster, Corden was visibly uncomfortable.

He may have been more upset when he tried a staple of Gomez’s morning routine: a shot of ginger. Corden coughed and nearly gagged on the drink, while Gomez, like on the roller coaster, stayed calm.

As the journey continued, the two went to a McDonald’s, where they thrilled several of her fans.

Corden then asked about Taylor Swift’s “squad”, which Gomez said she was the “OG” of. When Corden asked if he could join the squad, Gomez replied “Find me a boyfriend, and then we’ll talk about.”

“Are you on the lookout for a boyfriend?” Corden asked. 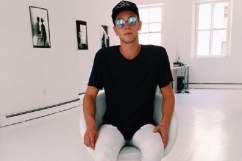