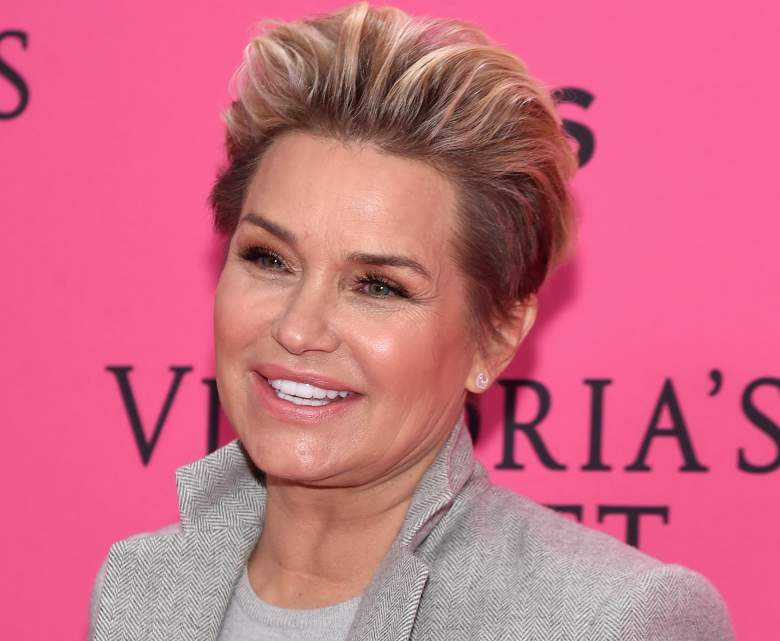 Yolanda Foster joined the cast of Bravo’s The Real Housewives of Beverly Hills four seasons ago and quickly found her footing. However, after a tough four years—think disease, divorce and drama—Foster is throwing in the towel.

Upon the announcement, Bravo released a statement to Us Weekly:

Yolanda was a great addition to The Real Housewives of Beverly Hills. Along with our viewers, we have enjoyed and appreciated Yolanda sharing her life events, especially more recently as she struggled with Lyme Disease…We now respect her decision to focus on her health and family. We wish her a full recovery and hope to see her again sometime on the show. 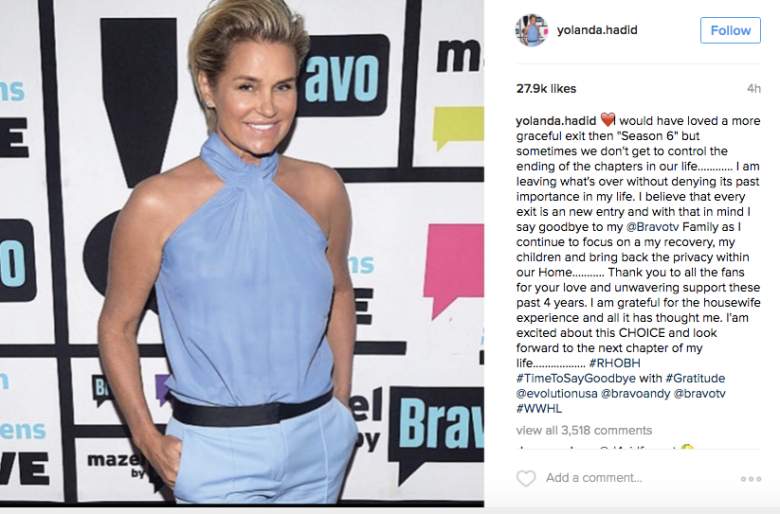 On June 15 Yolanda Foster announced her departure from the Bravo reality show in an Instagram post. (Instagram/yolanda.hadid)

On June 15, Foster—who recently changed her last name back to Hadid after her divorce from David Foster—took to Instagram and posted a photo of herself on a Bravo red carpet with a lengthy caption announcing her departure.

I would have loved a more graceful exit then “Season 6” but sometimes we don’t get to control the ending of the chapters in our life………… I am leaving what’s over without denying its past importance in my life. I believe that every exit is an new entry and with that in mind I say goodbye to my @Bravotv Family as I continue to focus on a my recovery, my children and bring back the privacy within our Home……….. Thank you to all the fans for your love and unwavering support these past 4 years. I am grateful for the housewife experience and all it has thought me. I’am excited about this CHOICE and look forward to the next chapter of my life…

Yolanda Foster and Gigi Hadid attend the 2015 Victoria’s Secret Fashion After Party at TAO Downtown on November 10, 2015 in New York City. Gigi Hadid was one of the models in the 2015 VS Fashion Show this year. (Photo by Grant Lamos IV/Getty Images)

Foster—or should we say, Hadid—joined The Real Housewives of Beverly Hills cast in 2012, and was noticeably different from her castmates. Unlike the other women, Hadid was rarely found screaming, and you’d never catch her in a catfight. She lasted from season three through season six, and was often the Switzerland—or should we say Holland (her home country)—in the group, much more calm and collected, very European.

3. There Are Rumors That She Had Been Demoted

TMZ is claiming that Hadid is leaving the reality show because she was demoted from the main cast. Instead of being a guest or featured friend on the show, like LuAnn De Lesseps did on The Real Housewives of New York City, TMZ’s production sources say, “Yolanda was offered a role as a ‘friend of the cast’–which would give her more free time to address her health issues,” and she declined. Seeing it as a demotion, she refused to take a smaller role. Sources have told TMZ that Bravo “isn’t bitter about the split,” and that the former model is welcome to appear on future episodes as a friend.

4. Season 6 Showed Her Fight With Lyme Disease and For Her Marriage

On January 15, 2015, Foster wrote about the severity of her illness on her blog, stating that: I have lost the ability to read, write, or even watch TV, because I can’t process information or any stimulation for that matter. It feels like someone came in and confiscated my brain and tied my hands behind my back to just watch and see life go by without me participating in it.

We can’t really blame her for wanting to leave after what she went through on season six. The season followed her very difficult struggle with Lyme disease, which she was diagnosed with in 2012. The whole world saw her going in and out of hospitals for various procedures in the hopes of improving her condition, like the removal of her breast implants.

The entire sixth season basically revolved around her condition; castmate Lisa Rinna was the first to stir the pot when she mentioned Munchausen’s syndrome in regards to Hadid’s illness. The question of whether or not Hadid was actually ill would be carried throughout the season to the reunion.

Because of her poor condition, Hadid was not in many episodes and couldn’t travel with the women. When she did make an appearance, cast members and their husbands would comment on how sick or surprisingly good she looked, or how quickly she left.

Her declining health is said to be one of the reasons her ex-husband, famous composer David Foster, filed for divorce in 2015, according to Us Weekly. The final episode of season six showed the women discussing Hadid’s divorce, and Hadid discussing it with her close friend and castmate Erika Girardi.

5. Her Closest Friends on the Show Left After Season 5

In this photo, Kim Richards is spending her birthday lunch with Yolanda Foster and Brandi Glanville. She is still friends with both women outside of filming RHOBH.

The fact that she didn’t have many close friends on the show anymore could have made it difficult to continue, especially since she was having major issues with castmates Rinna and Lisa Vanderpump.