In January, the couple also attended the Golden Globes together. According to PopSugar, they were seen holding hands and “cuddling up against each other” during the ceremonies. (Twitter/EntertainmentTonight)

While she won’t admit is, Alicia Vikander is not single.

The Danish Girl actress is dating actor Michael Fassbender, unless holding hands, kissing on the lips, and embracing is the new things besties do.

Fassbender and Vikander have reportedly been dating since 2014, when they met on the set of their new film, The Light Between Oceans. Though the couple has been seen out and about all over the world, they’re very private about their relationship. In fact, both have decidedly responded with, “no comment”, when asked about the status of their relationship.

The two got close when filming The Light Between Oceans in a quiet seaside town in Tasmania in 2014. However, Vikander told Entertainment Tonight, “we had met at Toronto Film Festival and just on the dance floor.”

I thought [I was a good dancer] until she started dancing and then I felt like I had two left feet…[The chemistry] was sort of there from the beginning.

E! News reported that they were dating in 2014, with a source saying, “Michael and Alicia are casually dating, spending a lot of time together.”

More confirmation came this past winter at this year’s Oscars, when Alicia gave Fassbender a kiss upon receiving her Oscar for best supporting actress in the film, The Danish Girl.

“That wasn’t even a question,” Vikander told Vogue UK in a recent interview about sitting together at the Oscars. “It felt like the right thing. We wanted to sit next to each other, simple as that. We wouldn’t have gone there and not sat together.” If that isn’t confirmation, we don’t know what is.

But there’s more. Shortly after New Year’s, the Jason Bourne actress opened up to E! about what how she and her “boyfriend” rang in the new year:

It was not a very, very late night because I had to fly here, but we had a grill going, cooked some pasta, made a good dinner, watched some fireworks…We counted down until midnight. It was great!…I think I kissed my boyfriend.

That same month, the couple also attended the Golden Globes together. According to PopSugar, they were seen holding hands and “cuddling up against each other” during their PDA-filled evening.

Their relationship hasn’t always been perfect, however. In September, 2015, a source confirmed to Us Weekly that the couple had split after nine months of dating. However, they are very clearly back together and going strong, now.

The couple is currently promoting their new film in which they star as husband and wife. The movie is based on a 2012 novel by M.L. Stedman, and is set to be released in September in the US, and November in the UK.

Vikander, who stars in Jason Bourne with Matt Damon, dated Alexander Skarsgard in 2013 and 2014. 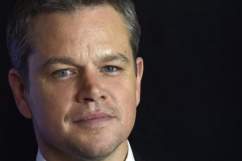