It turns out that she was on a family vacation and is already a swimsuit model. That’s not surprising, since her mother has long been considered one of Hollywood’s greatest beauties and her father is a famous guitarist.

1. Ava’s Attention-Getting Swimsuit Pictures Were Taken in the Caribbean

In her show-stopping bikini pictures, Ava posed on the beach in St. Bart’s in late June, 2016. She called one motion shot “just wiggling around.” Ava also posted a photo of herself sitting on a paddleboard. US Weekly reports the pictures were snapped during a family vacation. Her father was along. Although Ava’s parents divorced in 2007, they’ve still vacationed and spent some holidays together and remain amicable, People Magazine says. This time, his girlfriend, Orianthi, an Australian guitarist, was there instead, however.

To answer your question, yes I did stand up on this paddle board eventually lol

Ava was also in Anguilla, Caribbean. Born in Los Angeles, California on October 4, 1997, Ava stands just 5 feet, 3 inches tall, according to IMDB. Her middle name is Elizabeth, and she is the only child of Locklear and Sambora. 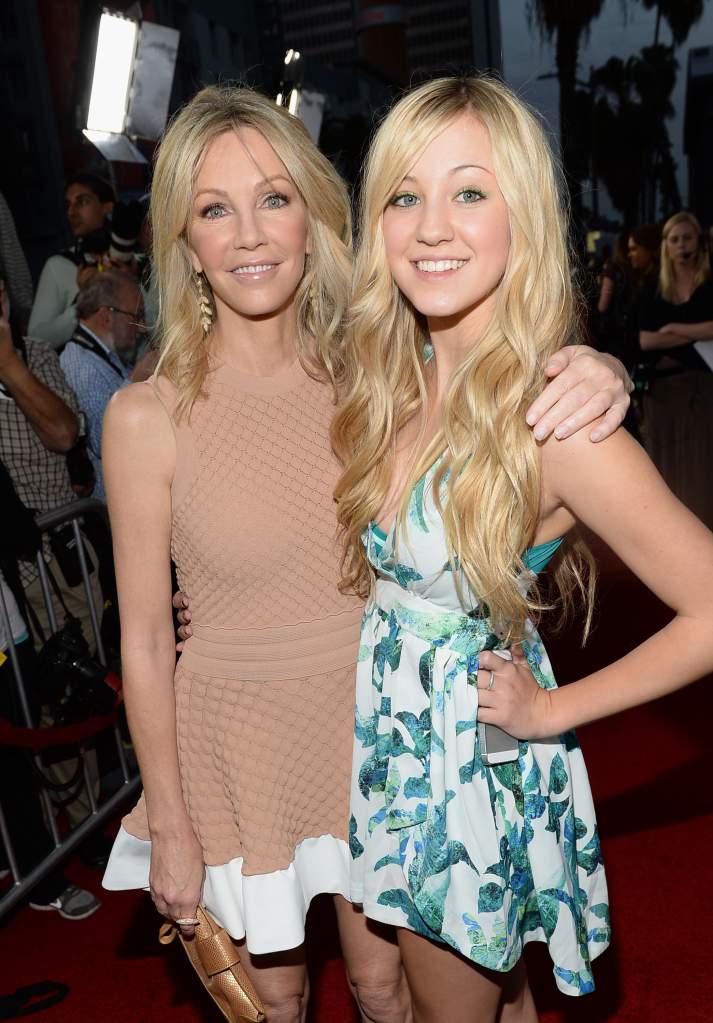 Heather Locklear and Ava Sambora in Hollywood in 2016. (Getty)

Heather Locklear gained fame by starring in prime-time television shows in the 1980s and 1990s, most notably Dynasty, Melrose Place, and T.J. Hooker. Locklear is also famous for her marriage to musician Tommie Lee before she married and divorced Ava’s father, Richie Sambora.

Locklear is no stranger herself to swimsuits; she’s posed in them for some iconic shots. Many people see a resemblance between Ava and a younger Heather. Maxim magazine calls Heather Locklear a “retro sex symbol” and notes the similarities. Locklear’s net worth is $25 million, Celebs Net Worth says.

Locklear frequently posts about her daughter on Instagram, both throwback shots as well as older pictures.

3. Ava’s Father Richie Sambora Was a Guitarist & Songwriter for the Band Bon Jovi for Decades 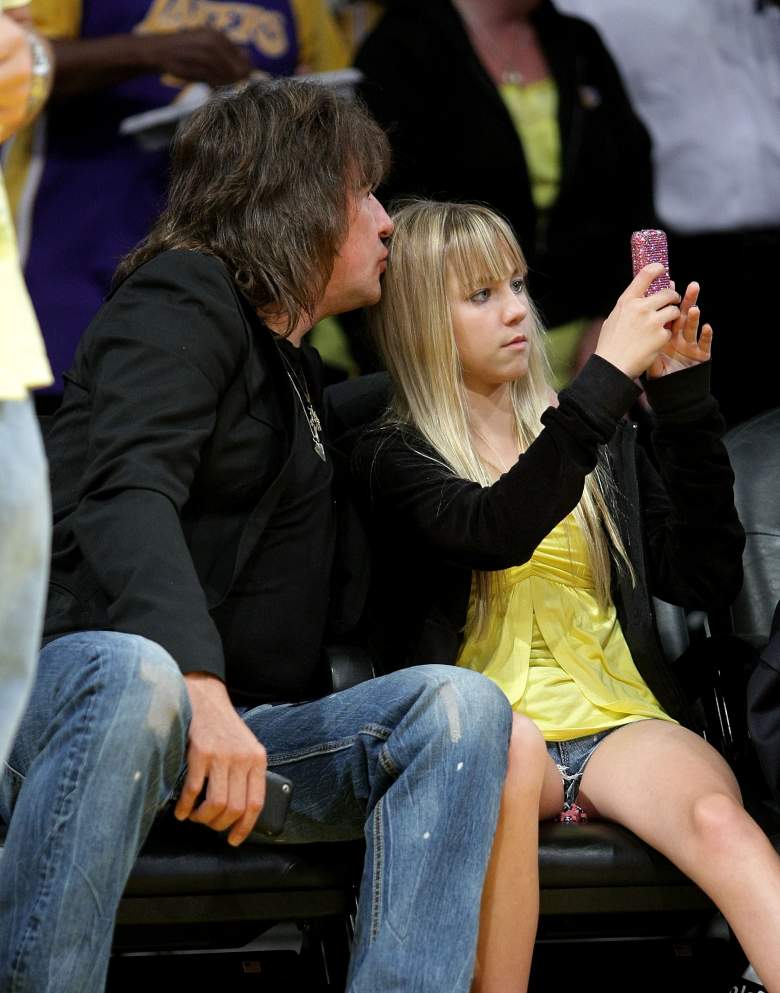 Ava Sambora and her father Richie Sambora at the Staples Center in Los Angeles in 2009. (Getty)

On Father’s Day, Ava posted a devotion for Richie Sambora on Instagram, saying, “Thank you for showing me boys aren’t all bad!! I can’t wait for the rest of our traveling adventures! I love you endlessly!”

Happy Father's Day to the coolest dad around. Thank you for showing me boys aren't all bad!! I can't wait for the rest of our traveling adventures! I love you endlessly!

She has also supported her father’s clothing line, “White Trash Beautiful,” walking the runway in 2010 for the brand in Los Angeles. Ava has attended many events throughout the years with her famous father. The lead guitarist for decades in the heavy metal band Bon Jovi, Richie Sambora left the band’s tour in 2013, saying he wanted to spend more time with Ava, People Magazine says. Sambora wrote many of the band’s songs, along with lead singer Jon Bon Jovi. 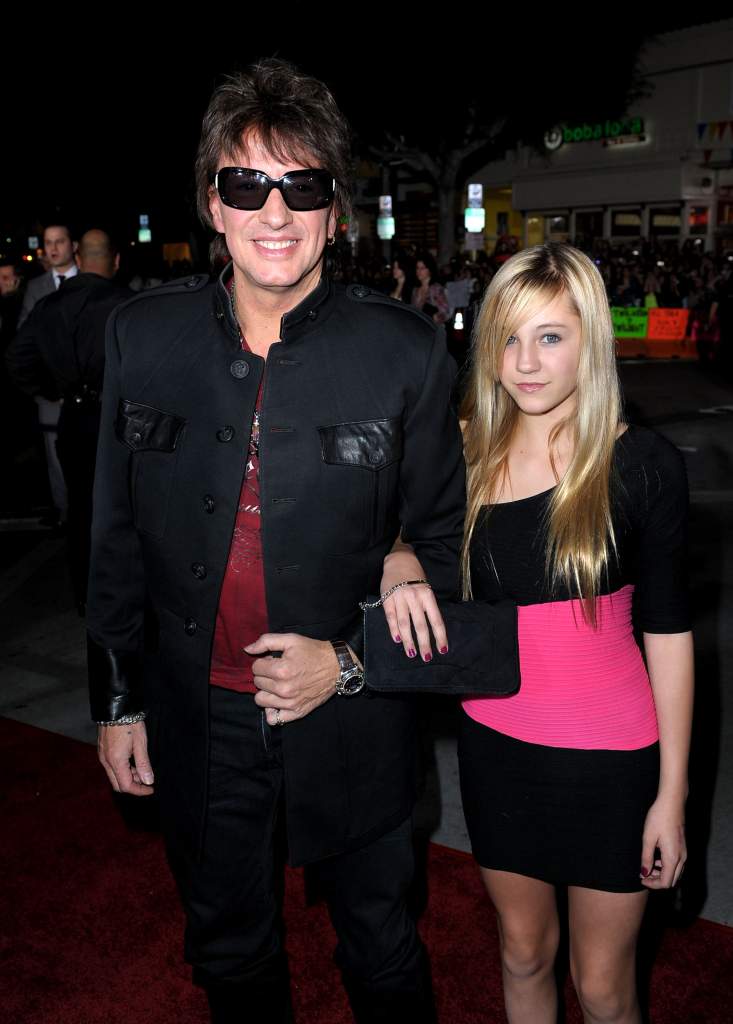 Ava Sambora and her father, Richie Sambora, at a movie premiere in California in 2009. (Getty)

The family has had some challenges. Billboard says Richie Sambora left the tour to enter rehab for a drinking problem. In 2012, TMZ reported that Locklear was hospitalized for mixing prescription drugs with alcohol. However, Heather Locklear has posted on Instagram about “good memories” she had with Richie Sambora.

Richie’s girlfriend, Orianthi Panagaris, is 31, UK Daily Mail says. He frequently posts on Twitter about her; Billboard says rocker Alice Cooper once claimed that Prince tried to steal Orianthi out of his band. Orianthi is also blonde and beautiful:

Missing this crazy one ?

4. Ava Is a Swimwear Model for a Malibu-Based Brand

Ava Sambora has already started modeling beach wear for Baes and Bikinis, a company for which she is a brand ambassador, US Weekly says. ET says the swimsuit line was founded by a Malibu teenager named Stephanie Princi.

It’s not the first time Ava’s posed on a beach, although TMZ notes she’s just starting out in the modeling business. She has also modeled for 138 Water, according to Life & Style magazine.

Heather Locklear has also posted swimsuit photos of her daughter.

Just another beautiful California day or rather girl

5. Ava Sambora Was on Her High School Cheerleading Squad & Was in a Judd Apatow Movie

Going on a yacht seems really glamorous until you get violently sea sick lol pic.twitter.com/lG42Oi12ej

Although she also posted a picture on Twitter while relaxing on a yacht (no wonder: Her father is worth $65 million, according to Celeb Net Worth), there’s a lot more dimension to Ava than that. Ava told Teen Vogue she loved high school cheerleading (she was a flier on the squad) because she liked being thrown in the air. “It’s an adrenaline rush!” she told the magazine. However, extra-curricular activities didn’t stop her from focusing on her studies. Richie Sambora told People Magazine his daughter had a 4.2 GPA and 11 scholarship offers. She chose Loyola Marymount University, UK Daily Mail says.

Congratulations my sweet, smart, and funny Princessa. My hero

Ava has said that she’s always wanted to be an actress since visiting her mother on sets. Ava appeared in the Judd Apatow movie, This is 40. She played “Sadie’s best friend” in her film debut in the 2012 movie, IMDB says.