UPDATE: Briana Culberson has revealed on Real Housewives of Orange County that she has been diagnosed with Lupus.

On Real Housewives of Orange County, we’ve seen Vicki Gunvalson’s daughter Briana Culberson deal with cancer scares, thyroid surgery, lymph node removals, surgery on her leg and now and infection. But, tonight, we see Culberson under serious duress. See the heart-wrenching clip of Culberson being taken to the hospital for a medical emergency below.

So, what is wrong with Culberson? Is she okay? According to mom Gunvalson’s recent Facebook post, doctors are still trying to pinpoint exactly what is going on with her. Gunvalson wrote:

For those of you that have messaged asking about Briana’s health, thank you so much! It’s been a long journey and we are still trying to figure everything out. Please continue to keep her in your thoughts and prayers.

Culberson had trouble breathing and they were waiting for an ambulance at a gas station. Coincidentally, cast member Tamra Judge’s son’s baby mama Sarah Rodriguez happened to be at the gas station. She offered to watch Culberson’s children until someone else was available and Gunvalson was grateful to have her there, saying that:

Ironically, Sarah is at the gas station at the same time the ambulance pulls up. It’s like a godsend. It’s like, Thank you, Jesus. I don’t know what I’m doing right now, but I just need somebody to be here for me.

Tamra Judge also raced to be by Vicki Gunvalson’s side when her daughter had difficulty breathing.

Let’s cross our fingers Culberson has an easier road to recovery than she has had. 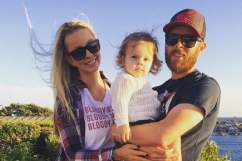