Calvin Harris met Tinashe, who he is supposedly dating, in 2014 and this pic was snapped. (Instagram)

In the midst of the drama that ensued after Kim Kardashian West posted a video of Kanye West and Taylor Swift chatting on the phone about his song, “Famous,” Swift’s ex boyfriend Calvin Harris was nowhere to be found, probably because he was busy with his supposed new boo, Tinashe.

While neither the DJ or singer have come forward to confirm the relationship, multiple witnesses have spotted them out together, sources confirmed the couple to Page Six and Us Weekly.

1. They’ve Been Dating For “Weeks” 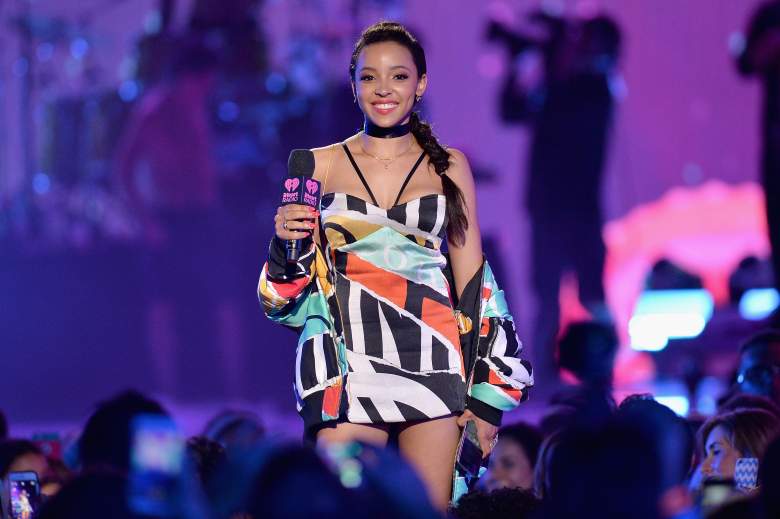 Calvin Harris and the singer have been dating for a few weeks. (Getty)

Multiple sources have confirmed to Us Weekly that the DJ and the R&B singer recently went on a date. A source close to Tinashe told Us Weekly that “it’s very, very early and we’ll see where it goes, but they are both into each other.” We’ve heard that one before…cough, Taylor Swift, cough.

A source close to Harris wasn’t as forthcoming, however. “It was just going out. No idea where it will end up going,” Us Weekly quoted. However, the source did admit that they went out.

Page Six reports that a source close to Tinashe said they are “casually” seeing each other.

They have been seeing each other on the DL. It’s only been weeks, so it’s still pretty casual right now. They’ve been on a few dates.

According to Page Six, the duo was spotted on a date at Nobu in Malibu on Saturday. “It was clearly a date. They were super close,” Page Six quotes a spy.

Neither of the musicians’ reps have commented on the budding romance.

2. News of the New Couple Broke During a Bad Week for Harris’ Ex, Taylor Swift

After Kanye West released controversial lyrics about Taylor Swift with claims that he gave her the fame she has earned, Swift spoke out about it during an acceptance speech. Ex boyfriend Harris backed his woman up on his social media. (Instagram)

Harris and Swift broke up in early June and it all seemed amicable, but just last week, Harris went on a Twitter rant about his ex after news broke that Swift actually co-wrote his song, “This is What You Came For.” He even went as far as to say:

As if that attack weren’t enough, just last night, Kim Kardashian West published a video on Snapchat of Swift and Kanye West on the phone. The two were discussing his song “Famous” and how she would be mentioned in it. The call, which Kardashian West recorded, was on speaker phone, and you can hear West reciting the lyric to hear, and Swift consenting to him mentioning her. She is currently under fire for possibly lying about her knowledge of the song.

3. Tinashe and Harris Got Together to “Talk Music”

The recent rendezvous was inspired by music, according to Us Weekly. The duo got together because Tinashe “wanted to talk music.” But Harris clearly had other things on his mind (maybe, how to get back at Swift? How to prove he’s over Swift?) “But Calvin is so into her and she thinks he’s cute,” a source close to the “All Hands on Deck” singer told Us Weekly.

4. They Bonded Over Rihanna

According to Us Weekly, Tinashe and Harris first met in 2014 when they were “reportedly writing songs together for Rihanna.”

It’s unclear what those songs were, but it might be because they never saw the light of day. In 2014, Just Jared reported that Harris revealed that Rihanna rejected a song he wrote with Tinashe for Rihanna’s upcoming album.

“I did one track and Tinashe wrote the top line, and I did all the music. I love it,” he said on Kiss FM. “But I don’t think she was into it. So I don’t know what is going to happen to that because it’s really good.”

Spin reported in 2015 that one of the songs Tinashe and Harris wrote for Rihanna leaked. According to Spin, the song, “5 AM,” is “a guitar-driven electropop blast of energy” and featured Tinashe on the demo vocals.

5. She’s Been Featured on His Albums

Since meeting in 2014, Tinashe and Harris collaborated on two tracks of their own, “5 AM” and “Dollar Signs,” according to Us Weekly. The song “Dollar Signs” appeared on Harris’ 2014 album, Motion, says Us Weekly.

“They stayed in touch and recently started hanging out again,” the source told Page Six.