Ginger Zee is ABC News chief meteorologist and has been a member of the Good Morning America crew since 2013, when Sam Champion left the show. Zee, who had worked as the GMA weekend meteorologist, was quickly picked as his successor. She also appeared on other ABC News programs, including Nightline and ABC World News Tonight. She was also a celebrity contestant on ABC's Dancing with the Stars and paired with Valentin Chmerkovskiy.

Zee, 35, is married to Ben Aaron Colonomous, a former WNBC anchor and current host of the show Crazy Talk. The couple have been married since June 2014 and they welcomed their first child, Adrian Benjamin, in December 2015.

Zee was born Ginger Renee Zuidgeest and was named after Ginger from Gilligan's Island. Her father is from The Netherlands and the show helped him learn English. "Although I am totally more of a Mary Ann, I love the glamour that Ginger brings to the island. I am hoping to do that here in Manhattan. I need to get one of those pearl colored sparkly gowns at some point," Zee told Time Out Chicago in 2011, when she first came to ABC News. Click through for photos of Zee and her family. The above photo shows Zee with husband Ben Aaron in 2013. (Getty) 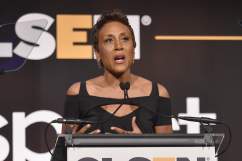