General Hospital actor Antonio Sabato Jr. is not the only soap opera actor speaking at the Republican National Convention. Kimberlin Brown, 55, is a California-born actress who will be speaking at the RNC Tuesday night, when the theme is “Make America Work Again.” The actress played the same character, Sheila Carter, on The Young and the Restless and The Bold and the Beautiful. She also starred on All My Children.

Brown will be called upon to highlight her experience as a small business owner. She and her husband of 25 years, Gary Pelzer, own an avocado farm.

Here’s a look at Brown’s life, career and why she’s speaking at the RNC. She is the closing speaker on Tuesday night.

1. She Joined the ‘Women in Business for Trump’ Coalition in May & Said NAFTA ‘Sold Hollywood Out’

In May, Brown was one of 100 women to join the “Women in Business for Trump” coalition before Donald Trump held a rally in Anaheim. Trump himself attended the meeting, Brietbart reported.

“As a small business person we can’t afford any longer to provide health insurance,” Brown said, adding that her business can’t provide it either. She said the North American Free Trade Act “sold out Hollywood” and “How about ‘American lives matter’? NAFTA truly affected the entertainment industry.” 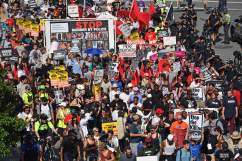 Kimberlin Brown was on the same plane as Karl Rove to Cleveland. (Instagram/@Kimberlin_Brown)

Brown does hosts Dramatic Designs for The Design Network. On the show, she shows off challenging projects and gives audiences tips on design. She owns a design firm called K. Brown Designs, according to her Twitter page.

“Given my acting background, I thought this was a great opportunity to show people another side of me and let them get to know Kimberlin,” Brown said in a Blog Talk Radio interview, reports Fine Homes and Living. “I love that I can give design help when needed.”

3. She Played a Soap Actress in ‘Six Feet Under’

According to Brown’s IMDb page, Brown starred in two episodes of the HBO drama Six Feet Under as a soap actress. By then, she’d already been well-known for her role as Sheila on The Young and the Restless and The Bold and the Beautiful.

Brown has also made appearances on Family Feud and Wheel of Fortune outside of her soap roles.

Long before she found fame as Sheila, she guest-starred in Fantasy Island, T.J. Hooker and Dragnet. She also had small roles in Back to School, Eye of the Tiger, Who’s That Girl and 18 Again!. 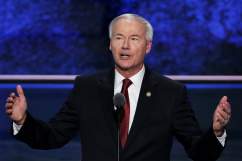 4. There Were Rumors That Sheila Would Come Back to ‘The Young and the Restless’ in 2015

Brown’s character might be dead, but that’s never been a reason for a character not to come back to a soap opera. She last played Sheila on The Young and the Restless in 2006, but Soap Shows reported in August 2015 that Brown had signed a deal to play the character again.

“I know there are a lot of rumors about me coming back to TV, but I am not at liberty to say whether I am or not…time will tell,” Brown wrote on her Facebook page after the rumors began.

Eventually, Brown posted a picture on Instagram with the message, “I’ll be back!”

In 1993, Brown earned a Daytime Emmy Nomination as Outstanding Supporting Actress in a Drama Series, but she lost to Guiding Light‘s Ellen Parker. She did win Outstanding Villain in 1993 and 1995 at the Soap Opera Digest Awards and earned three other nominations in the category.

Brown isn’t the only actress to play Sheila. Michelle Stafford played the part after Sheila had plastic surgery to look like Stafford’s regular character, Phyllis Summers.