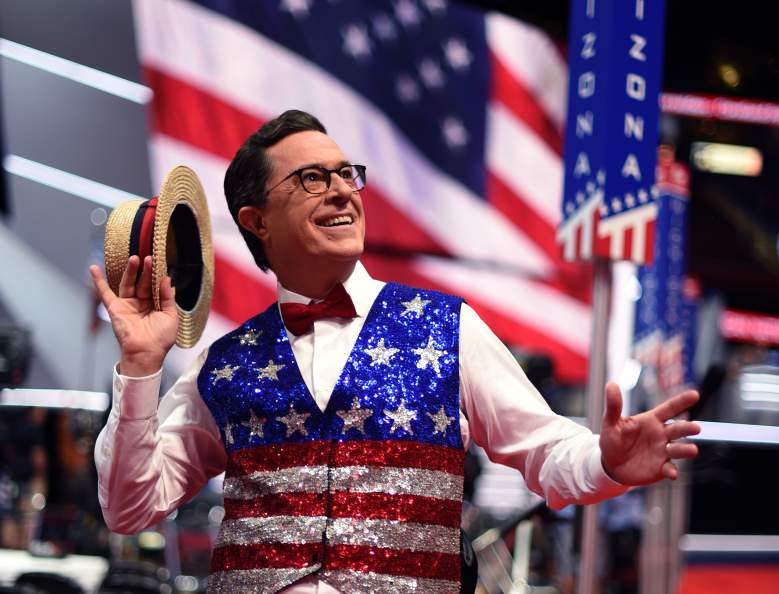 Stephen Colbert will be taping The Late Show live from the RNC in Cleveland. (Getty)

The news media won’t be the only ones broadcasting live from Cleveland. A few of the late night comics, including Stephen Colbert, will be there to deliver their commentary directly from the Republican National Convention, where Donald Trump will officially be named the Republican nominee for president.

The Late Show with Stephen Colbert, which stars on CBS at 11:35 p.m. each night, will be live each night after the show. It feels like a desperate move for the show, since its ratings are falling behind The Tonight Show Starring Jimmy Fallon and Jimmy Kimmel Live. Colbert also plans on airing live episodes from Philadelphia during the Democratic National Convention.

Colbert might also be joined by a familiar friend. Vulture is reporting that former Daily Show host Jon Stewart will join Colbert. CBS did not comment.

Someone managed to capture video of Colbert filming at the Quicken Loans Arena over the weekend.

After Colbert wraps, you can flip on NBC to catch Late Night with Seth Meyers. However, Myers will only be doing a live episode on Thursday, June 21, following Trump’s official nomination, NBC said. The episode will start at 12:35 p.m. It’s Meyers’ first live Late Night episode. Below is Meyers’ preview segment on the RNC.

Bill Maher will go live from Cleveland on Wednesday, July 20 and Thursday, July 21, beginning at 11 p.m. on HBO. He’s also streaming the episodes on YouTube and will be doing the same during the DNC. Maher’s panelists for July 20 will be Michael Moore, Joy Reid and Dan Savage. The July 21 show will feature Heather McGhee, California Lt. Gov. Gavin Newsom and Robert Reich.

Lastly, The Daily Show with Trevor Noah will be heading to Cleveland for the convention. New episodes of the show air on Comedy Central at 11 p.m. Here’s their preview segment: