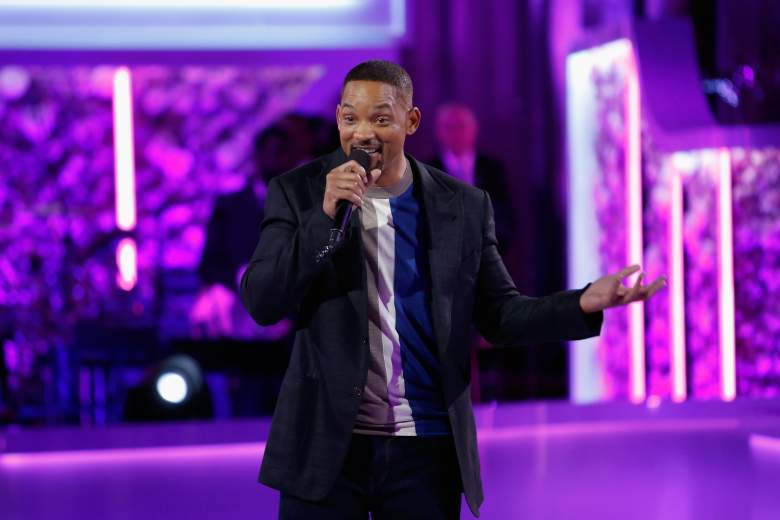 Will Smith, who plays Deadshot in Suicide Squad, will be attending SDCC. (Getty)

Easily the most anticipated panel at San Diego Comic Con 2016 is the Warner Bros. panel on Saturday at 11:30 a.m. PT. The studio has a two-hour block in Hall H, the largest venue at the San Diego Convention Center, to explain to audiences how it plans to rebound from the mixed response Batman v. Superman: Dawn of Justice received upon its release in March.

Warner Bros.’ DC Films unit has two previously announced films to plug. Up first is Suicide Squad, which hits theaters on August 5. The film, written and directed by David Ayer, will be represented by all of its main cast. Will Smith, Jared Leto, Margot Robbie, Joel Kinnaman, Viola Davis, Jai Courtney, Jay Hernandez, Adewale Akinnuoye-Agbaje, Scott Eastwood, Cara Delevingne, Adam Beach and Karen Fukuhara are all scheduled to be there.

Up first is a sizzle reel, although host Conan O’Brien said that everyone in the hall can’t record it.

Conan warns that we are not allowed to record anything shown today but we can sketch whatever we see.

The directors came out on stage first, including Ben Affleck. That once again confirms that Affleck is directing a solo Batman movie.

Ben Affleck came out on stage as director of Batman. Love it.

Rick Famuyiwa, who directed Dope, was confirmed as the director for The Flash.

It looks like Affleck’s Batman movie will come out between The Flash and Cyborg.

James Wan is so excited about Aquaman "I mean, fucking Aquaman, what can I say."

Justice League director Zack Snyder might have teased that the Hall H crowd will get to see every member of the team together:

Zack Snyder just talked about seeing the #JusticeLeague all together and added "maybe you'll get to see that later". #SDCC2016 #WBSDCC

Wonder Woman Is First Up

Wonder Woman will be represented by actors Gal Gadot, Chris Pine and Connie Nielsen and director Patty Jenkins. The film is scheduled for June 2, 2017 and a trailer was shown.

It's pretty amazing to see a woman director onstage in command of all of Hall H #PattyJenkins #WonderWoman #SDCC pic.twitter.com/HKeODeh5AA 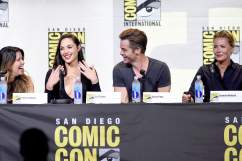 Justice League also got a surprise teaser and an image, proving that Superman will be in it.

The first look at the #JusticeLeague, straight from #SDCC2016 in Hall H. pic.twitter.com/P3hPZ1Dsrn

The LEGO Batman Movie opens on February 10, 2017, so expect a new trailer for that film. Actor Will Arnett and director Chris McKay will both be there.

Here’s yet another trailer for Suicide Squad:

Charlie Hunnam is the only announced guest representing King Arthur: Legend of the Sword. The Guy Ritchie-directed film hits theaters on March 24, 2017, so this will definitely get a trailer at SDCC.

Kong: Skull Island‘s cast, including Tom Hiddleston, Brie Larson, John Goodman, Corey Hawkins and Jason Mitchell, will represent that film. Director Jordan Vogt-Roberts will be there as well. Hopefully, there will be more explanation on how the film will fit in with 2014’s Godzilla, since Legendary wants to eventually make a Godzilla vs. King Kong movie. This is set for release on March 10, 2017, which means we should get a trailer.

Lastly, Eddie Redmayne, Katherine Waterston, Dan Fogler, Alison Sudol, Ezra Miller and Colin Farrell and director David Yates will plug Fantastic Beasts and Where to Find Them. This is a continuation of the Harry Potter series, taking place in America decades before Harry went to Hogwarts. It’s scheduled for November 18.

Eddie Redmayne makes like Oprah, gives a wand out to everyone in Hall H pic.twitter.com/fxRLz2lZGp

The panel ended with a trailer for Fantastic Beasts. 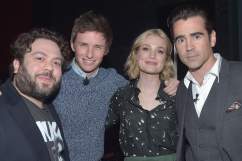 WATCH: ‘Fantastic Beasts And Where To Find Them’ Trailer Shown at SDCC 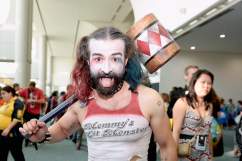