Sharknado: The 4th Awakens premieres tonight and, yes, April is alive … but some of her co-stars may not be by the end of the movie. You’ll have to watch to see which celebrities get eaten by sharks in the fourth installment of the series. As usual, the cast is filled with tons of celebrity cameos, in particular a chunk of reality stars from the Bravo network. And, Ian Ziering reprises his role as hero Fin Shepard and David Hasselhoff appears as his father. For all the details on what time the show airs, what channel to watch and more, read on below. 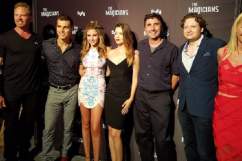 OFFICIAL PLOT DESCRIPTION: After going to space to destroy the sharkicane in Sharknado 3: Oh Hell No!, Fin and April enjoy several years of peace as they raise their newborn son. Due to the years without a Sharknado, a “Shark World” theme park is opened. However, the phenomenon returns when sharknadoes strike Las Vegas, forcing Fin to take up the chainsaw once again.