Tonight is the overnight dates episode of The Bachelorette 2016, but last week’s show left viewers with a major cliffhanger. Who was sent home? Was it Luke Pell or Chase McNary? Tonight’s official episode synopsis reads:

A startling finish to the rose ceremony after the hometown dates will leave three men to be swept away for more romantic adventures in the exotic country of Thailand. There is electricity and passion in the air during these amorous excursions, as JoJo continues to explore what her future would be like with these potential partners. She will spend special intimate time with each of the final guys, and there are possible invitations to spend the night in a “fantasy suite.” Will JoJo gain some clarity and come closer to finding her true love, or will more uncertainty and doubt surface just one week before she might entertain a proposal? And will her feelings of love for more than one man get in the way of her happy ending? Another stunning rose ceremony forces JoJo to search her own heart and finally pick the two men she wants to introduce to her family.

For all the spoilers on who gets eliminated tonight, who the final two contestants are, and the overnight dates, read on below.

The Final Two Are …

The final four! Whose hometown date are you most looking forward to? #TheBachelorette

This season, Reality Steve reports that the final two contestants are Robby Hayes and Jordan Rodgers. Both men have been plagued by tabloid rumors and ex-girlfriends both on and off the show. Reality Steve has reported allegations of infidelity on both mens’ parts just prior to filming. In addition, Hayes and Rodgers each appear to have ditched their “girlfriends,” at the time, in order to film The Bachelorette. Do you think Hayes and Rodgers are on the show just for fame or are they really looking for love?

To find out the reported season winner, check out the below link:

Who Gets Eliminated Tonight

Before the season premiered, Chase McNary was reported by Reality Steve to have been eliminated before the overnight dates. His report then switched to Luke Pell, so it looks like Pell will be sent home. Whatever the case, it almost doesn’t even matter because both of these contestants will be eliminated by the end of the episode as neither of them are reported to be in the final two.

After eliminating Pell at the airport, star JoJo Fletcher sobs and worries that she made a mistake. She also confesses that she already misses him even though he just left. For those Pell fans out there, the rumor Reality Steve is reporting is that Luke Pell is in the running to be the next Bachelor.

McNary Gets Dumped Inside the Fantasy Suite

This season, the overnight dates take place in Thailand. JoJo Fletcher’s dates consist of hiking, eating seafood, kissing in a rainstorm, a boat ride, beaches, and a little bit of drama. JoJo realizes she is in love with two men and becomes overwhelmed with what the future may hold for her. Unfortunately, Chase McNary is not one of these men. Reality Steve states:

Chase and JoJo do go back to the fantasy suite, but while there, JoJo basically says she’s not feeling like she should, and she lets Chase go before they spend the night together. They don’t end on good terms. Basically she’s upset and telling him essentially she didn’t mean to hurt him and that’s not her intention and he comes back with, “But that’s exactly what you did.” So when he leaves, he isn’t happy.

Apparently, McNary is not completely gone as he shows back up at the rose ceremony to apologize to JoJo Fletcher and to clear the air.

Tomorrow airs the Men’s Tell All Special, so be sure to tune in at 8 p.m. ET/PT on ABC.

Next week on August 1, 2016, airs the 2016 finale of The Bachelorette, followed by the After the Final Rose Special. August 2, 2016 is the premiere of Bachelor In Paradise. 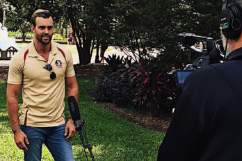 Read More
Reality TV, The Bachelorette, TV
Tonight is episode 9 of The Bachelorette 2016. Get details on what's in store for JoJo Fletcher's overnight dates, the season winner and episode spoilers here.