Tonight is the Season 3 premiere of FX’s Tyrant, and we’re all wondering the same thing: who will take over as King now that Abuddin President Jamal Al-Fayeed is dead? The Season 2 finale left us in shock after Jamal’s daughter-in-law, Nusrat, shot him in the back. This season’s spoilers hint at Sammy’s rise as King, and more screen time for Molly Al-Fayeed, as she’s thrown into what TV Line calls the “scariest storyline ever.”

Read on to find out where, when and how to watch the series premiere.

NUMBER OF EPISODES IN SEASON: 10 episodes 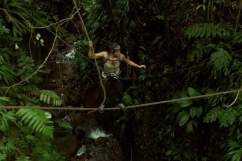 ‘American Tarzan’ Series Premiere: What Time and Channel Is It on Tonight?