Alex Jones, the conspiracy theorist behind Info Wars, had an unexpected guest for his protest outside the Republican National Convention today in Cleveland. Comedian Eric Andre showed up, with Jones under the assumption that he was representing The Daily Show even though the Man Seeking Woman star was not. Andre takes the stage in the above video at the 4:30 mark.

Jones also assumed Andre was a Democrat, but Andre said he is really a “nihilist.” Andre then told Jones, “I’m not on The Daily Show, I’m on MySpace.”

“I want you to have sex with my wife,” Andre told Jones.

“Oh, so just trying to be shocking,” Jones said.

“No, not at all. And here’s my hotel key. I want you to have sex with my wife,” Andre said.

After Andre asked why his urine is yellow, Jones said that Andre doesn’t even want free speech, he just wants to shut down our speech. Andre then says he agrees with Jones’ September 11 conspiracy theories. As Andre insisted he was on Jones’ side, Jones told the crowd that Andre would be edited out and he was lead off the stage. 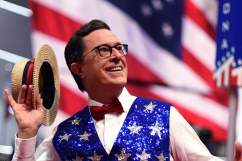