One week ago, Kanye West premiered the music video for his latest song “Famous” at the Forum in Los Angeles.

The scandalous video has just been released on YouTube.

The song from his new album The Life of Pablo is about…you guessed it…being famous and the video features 12 famous people sleeping naked in bed together.

The 10-minute video goes silent in the middle and all you can hear is the snoring and breathing of the sleeping celebs.

The song was already making waves before the video came out, thanks to lyrics like, “I feel like me and Taylor might still have sex / I made that (expletive) famous,” but the video has taken it to a whole different level of boundary-pushing. In bed you’ll spot his wife Kim Kardashian, Taylor Swift, Rihanna, Donald Trump, Chris Brown, Bill Cosby, Anna Wintour, Caitlyn Jenner, George Bush, Ray J, and Amber Rose, breasts and butts exposed.

The lyrics insinuate that he made all of these people famous.

Of course, the actual celebrities and politicians are not in that bed, because who would agree to that? Accept maybe Kim K.

According to USA Today, West took “artistic license to broadcast nude likenesses of real people to a worldwide audience.”

But still, couldn’t any of these public figures sue West for this? Especially Swift? USA Today reports that “according to legal experts, there’s nothing illegal about the video.”

Obviously the video has caused an uproar, with celebs like Lena Dunham speaking out about it, calling it one of the “more disturbing ‘artistic’ efforts in recent memory” on her Facebook page:

Let’s break it down: at the same time Brock Turner is getting off with a light tap for raping an unconscious woman and photographing her breasts for a group chat… As assaults are Periscoped across the web and girls commit suicide after being exposed in ways they never imagined… While Bill Cosby’s crimes are still being uncovered and understood as traumas for the women he assaulted but also massive bruises to our national consciousness… Now I have to see the prone, unconscious, waxy bodies of famous women, twisted like they’ve been drugged and chucked aside at a rager? It gives me such a sickening sense of dis-ease.
I was raised in the art world by a dad who painted aggro scenes of sexuality and war and a mom who, ironically enough, has photographed some butt naked life-sized dolls of her own. I live for the nude rabble rousing of Carolee Schneemann and Hannah Wilke, for Kathy Acker’s arty porn, for Paul McCarthy’s gnomes with butt plugs and Vito Acconci masturbating under the gallery floor and Carrie Mae Weems shedding a blinding light on the pleasures and terrors of black womanhood. If it’s been banned, I’ll probably love it. Because I know that art’s job is to make us think in ways that aren’t always tidy or comfortable. But this feels different.

Amber Rose disagrees with West’s claims in an interview with The Daily Beast:

The misconception—and I still hear this seven years later, to this day—is, ‘You’re only famous for Kanye,’” she said. “Initially, absolutely. In 2009, when they’re like, ‘Amber Rose—Kanye’s girlfriend,’ I was like, ‘OK, that’s pretty accurate. That’s what it is.’ But I didn’t ask to be famous, and I didn’t even talk or do interviews for two years, because I thought, ‘I don’t want this. I’m not famous.’ Over time, with going out in public, I realized it would never go away, so I didn’t have any choice but to progress. Everything I’ve done since then is my own doing, and I’ve worked my f–king ass off for everything I have. But Wendy Williams put Charlamagne on. Jay Z put Kanye on! But they don’t do that to men, and they always want to diminish my accomplishments and put them on someone else when I work really hard.

We’ll wait for the rest of the bed crew to unleash their venom against West, because we have a feeling those comments are only the beginning. 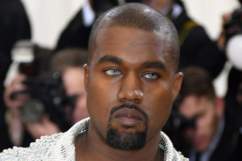