Another Simon & Garfunkel song was heard later in the night, as “America” was used in the video to introduce Bernie Sanders. The video was very similar to a campaign ad Sanders used, but with an image of Clinton and Sanders together at the end.

Simon’s performance was mocked by some on Twitter though. It was a bit ironic that he was brought on stage to sing about unity when Simon and Garfunkel themselves are hardly unified. They don’t perform together and Garfunkel famously told the Telegraph last year that he “created a monster.”

I'm grateful for Paul Simon's singing voice. I mean, how it used to sound. Last night, not so much. #3ThingsImGratefulFor #DailyGratitude

Simon wasn’t the only musical performer on the night. During a section on addiction, Demi Lovato performed “Confident.” Lovato has struggled with addiction herself. 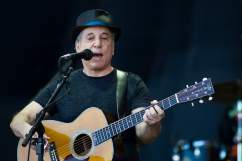 Paul Simon’s Net Worth: 5 Fast Facts You Need to Know