Tonight was the season finale of Spartan: Ultimate Team Challenge, and six teams competed for the glory of being named the season one champs. Team Grit, American Dream Team, Bounce Squad, the Muddy Minglers, the Comeback Kids, and the Free Spirits, all competed for the opportunity to win the $250,000 grand prize, but only one team prevailed.

Team Comeback Kids was victorious in tonight’s competition.  Beni Gifford, Ian Deyerle, Lynnae Kettler, Laura Messner, and Matthew Campione made up the team. Though Team Grit trailed closely behind them for a majority of the race, Team Comeback Kids was able to pull through and win the title of this season’s champions.

Tonight marked the conclusion of Season 1 of the show, and the obstacles certainly succeeded in raising the bar on team competitions. The rules required that each team consist of five people– two men, two women, and one elite Spartan athlete. All athletes on Team Comeback Kids had something in common: they all overcame hardships like addiction, depression, and an eating disorder. They also cite Spartan races as helping them get through difficult times.

In an interview with The Monterey Herald, Ian Deyerle said, “I believe I was assigned to this team partly because all of us have had similar life situations in our past. All of our stories had to do with something in our lives and coming out ahead.” 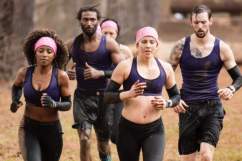 ‘Spartan Ultimate Team Challenge’ Season 1 Finale: What Time & Channel Is It On?