Quinto and McMillan photographed together at the 2016 Nantucket Film Festival. (Getty)

This Friday, July 22nd, Star Trek Beyond hits theaters nationwide. With a 91% positive rating on Rotten Tomatoes and a favorable Metascore of 71 on Metacritic, it’s looking to be a big hit this summer, at least with critics and potentially with fans as well.

One of the most consistently praised elements of the new Star Trek movies has been Zachary Quinto, who plays Spock. Not only is he an acclaimed actor, he’s also one of the most prominent openly gay actors in all of Hollywood. In the past, he has dated notable actors such as Jonathan Groff.

For the past several years, however, Quinto, 39, has been in a relationship with Miles McMillan, 27. McMillan is a successful, working male model who has modeled for a number of notable companies, including Tommy Hilfiger and Armani Exchange. The couple, about 4 years into their relationship, remain not just happy, but open about showing their loving relationship to the world, whether walking out and about on the streets of New York together or professing their love for each other to their many Instagram followers.

Zachary Quinto and the aforementioned Jonathan Groff dated for a few years but the relationship ended in 2013. There were rumors as to what caused the split, but those were quickly followed by a new rumor: that Quinto had moved on pretty quickly.

Out reported on Perez Hilton’s rumor that Quinto had begun spending time with McMillan. They even used a photo of the two together that surfaced on Tumblr as potential proof. At the time, McMillan was known for modeling he had done for a Do the Hustle photoshoot, which Out had called “controversial.” Still, at the time it was merely rumor that Quinto and McMillan were dating, and it wasn’t until nearly a year later that any confirmation would come.

all this pretend is making me miss my real life baby. can't wait to see you soon @milesmcmillan …

Rumors kept surfacing, as did pictures of the two of them together, in 2013. But it wasn’t until August of 2014 that proof from Quinto and McMillan themselves confirmed that the two were dating.

The proof was in their social media accounts, as each of them posted photos of the other around similar times on Instagram. Quinto’s Instagram post, shown above, refers to McMillan as “my real life baby.” McMillan’s post of Quinto, released at a similar time, also called Quinto his baby. This was the first time they had acknowledged their relationship on social media, but it was far from the last time.

3. They’re Frequently Affectionate and Open About Their Love on Social Media

side eye for the pride eye. so grateful for my love @milesmcmillan

With Quinto and McMillan’s relationship now official to the public and seemingly going very well, the couple began making declarations of affection for the other on their Instagram accounts a much more frequent thing.

The affection has only grown in the years. Quinto has posted pictures calling McMillan “a perfect man,” while McMillan as called Quinto “the love of my life.” Quinto has also referred to coming home to McMillan as the “perfect end” to his day.

Their respective Instagram accounts have grown quite popular over the years. Part of this is due to the fame that comes with being a movie star and a successful model. But another element of it is the fact that they are a famous, open gay couple that are willing to proudly state their love for each other consistently on their accounts, both in pictures and captions.

4. They Are Constantly Seen Walking Around New York or On Dates By Paparazzi

i never post paparazzi pics – but this one captures the joy of the amazing birthday morning family walk which lead to an incredible day full of gratitude and creativity and love. thanks for all the well wishes and celebration. i am thankful for such amazing fans and even more amazing friends. not to mention @milesmcmillan and noah and skunk… where it all begins and ends. thirty-nine never felt so good!!!

As we’ve seen, Quinto and McMillan are not shy about photographing themselves or each other. But the paparazzi has latched onto them so much that it’s arguable whether they even need to be taking their own pictures. A celebrity couple that has been known to go out on public dates, or even just take a stroll down the Manhattan streets, paparazzi websites have countless articles based entirely on just spotting the two of them out and about.

The Daily Mail, for example, has several articles about spotting and photographing Quinto and McMillan together. Sometimes the articles are to show how affectionate the couple was being, kissing in public. Other times it’s simply to show that the couple was seen outside, and what kind of shirts they were wearing.

Other sites have also found the couple in various situations in New York, such as leaving the Rainbow Room, going for a walk together on Easter, or just walking their dogs together. Though the paparazzi gets a photograph of them every chance they can, often these pictures are not of glamorous celebrity events, but simple, relatable events.

Quinto and McMillan at the 2015 GLSEN Respect Awards. (Getty)

Quinto and McMillan, for the past year, have focused on a life together. That included a major purchase for the couple – their own place to live. In 2015, Quinto and McMillan purchased a loft in the NoHo neighborhood of Manhattan. It was priced at over $3 million.

According to Variety, the loft is 2,195 square feet with 2 bedrooms and 2 and a half bathrooms. The materials they found also showed that the loft has a study, as well as a key-lock elevator which “opens directly into the kitchen area.” The living room/dining room was measured at 25’x23′.

With a large, expensive loft for a couple that has been together for several years, some have wondered if marriage is just around the corner for the loving couple. But in an interview, Quinto stated that they were comfortable where they were, and that he didn’t see marriage as a priority: “There is a lot of comfort and real connection with him… Miles and I talk about it, but we’re taking things one step at a time. I’m ambivalent about marriage.” 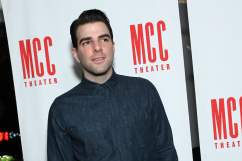 Read More
5 Fact Facts, Star Trek Beyond, Zachary Quinto
Zachary Quinto has been a part of the Star Trek franchise since the 2009 film. His relationship with model Miles McMillan is a bit more recent.