Countess Luann De Lesseps will lose her title when she marries fiance Tom D’Agostino on New Year’s Eve, but she says it’s more than worth it. Luann, who stars on the Real Housewives of New York City, was married to ex-husband Count Alexandre De Lesseps for many years and met him in Europe. She has said they were very much in love when they met and had very happy times together. In their marriage, they had two children, a son and daughter. Luann has revealed on RHONY that she and her ex later ended up having an open marriage, which meant they had extramarital affairs. On the first reunion of the show’s first season, Luann revealed that her ex told her he was seeing someone and wanted to part ways via an email.

With the divorce, Luann had to make adjustments to her life. Ex Alex, who has an estimated net worth of $50 million, provided a high-end lifestyle for Luann over the years. Alex is an investment banker, who also had a great fortune from his ascendancy from the renowned architect Ferdinand de Lesseps, who was the developer of the Suez Canal. Some of the positions that the Count has held in his career include President of Coral Capital Limited of London and Pandaw Investment Holdings in Hong Kong and the co-founder as well as President of Blue Orchard Finance S.A. of Geneva. 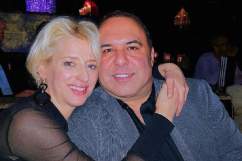