In 2015, Joe Jonas debuted DNCE, a new band from the former Jonas Brothers member. While brother Nick Jonas continues to succeed with a solo career, DNCE has given Joe his own success. The group climbed the charts quickly with the catchy hit "Cake by the Ocean" and their EP Swaay. The group was supposed to release their first studio album this summer, but that's been pushed to October.

Despite the delay, the group isn't really slowing down. They have a performance scheduled for NBC's Today Show on August 26. They also have tour dates scheduled throughout the fall and were nominated for Best New Artist at the MTV VMAs, which are on August 28.

DNCE is made up of Jonas and three other experienced musicians: drummer Jack Lawless, guitarist JinJoo Lee and bassist/keyboardist Cole White. Click through for an introduction to the band and an explanation on what "Cake by the Ocean" means. (Getty) 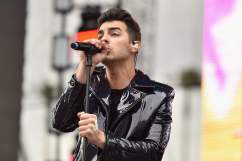 Who is Joe Jonas Dating?